You’re not my dad, Gov. Cuomo — and please stop pretending 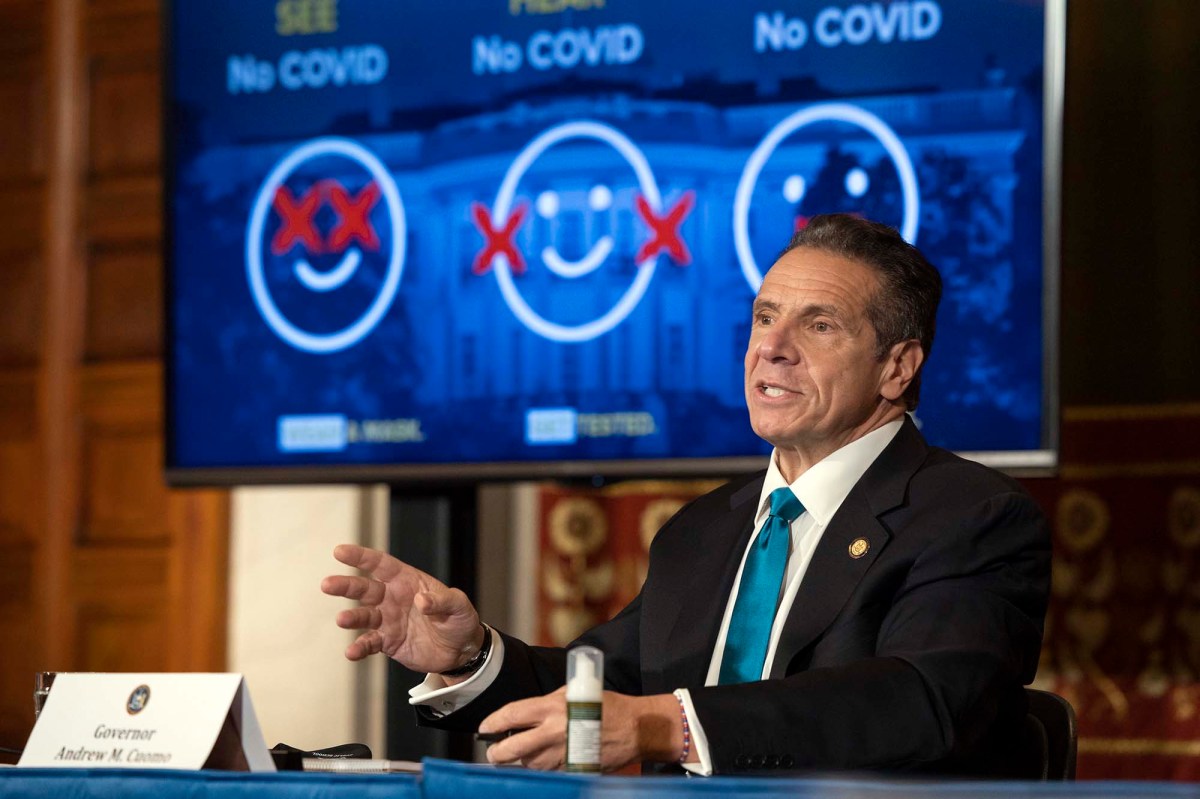 Gov. Andrew Cuomo has a parenting problem. Not with his own children, but with the 8 million incorrigible residents of Gotham, who refuse to bend to his will. He has tried everything: groundings, lectures, threatening to send them to bed without supper (at restaurants). And yet these ungrateful brats continue to question the more ridiculous of his ever-changing and often-irrational COVID-19 guidelines.

And this is a problem for a man like Cuomo, who seems to fancy himself the Father of New York, much like a Central Asian dictator might think of his nation as his children.

His most recent edict was implementing an early bedtime for New York City in response to spiking cases. He ordered bars, restaurants and gyms to close their doors at 10 p.m., sparking ire and confusion. After all, it isn’t as though the virus becomes more dangerous after dark, and already-struggling eateries would have to shut down during prime late-night dinner hours. The city that never sleeps must now turn in early, courtesy of Cuomo’s disciplinarian governance.

In July, when New Yorkers had found something that felt a tiny bit like normalcy during quarantine — namely, drinking frosés on the sidewalk with friends they hadn’t seen since March — ­Cuomo ordered bars to serve a food item with every drink. Pubs quickly responded with some good old-fashioned New York attitude, adding $1 “Cuomo chips” to the menu, making “soup” out of bouillon cubes and offering patrons a single corn tortilla sold as a “vegan taco” to enjoy with their frozen margaritas.

Exactly how this would cut down on positive cases was unclear, since patrons could simply throw out their unwanted food and continue drinking normally. But venues tried to follow the rules. But like a parent making sure his children are eating their vegetables, the governor wouldn’t allow these establishments to get away with a cheap and easy fix. He made the rules stricter, demanding that the food ordered be “similar in quality and substance to sandwiches and soups”; a panini would fly, pretzel bites wouldn’t.

In doing so, he was making a point: No, you couldn’t find loopholes around his silly edicts, you shouldn’t make jokes at his expense and you would be punished for attempting either.

Cuomo’s approach to leadership has all of the worst components of a nanny state — heavy-handed regulation, complicated rules and intrusions into private life — without any of the benefits. The state, after all, isn’t bailing out businesses being asked to jump through hoops and follow restrictions that aren’t even clearly curbing COVID.

The governor’s enablers share some of the blame. In the early days of the lockdown, when his coronavirus briefings were must-watch TV for many New Yorkers, some observers developed a sort of obsession with his domineering tone and mannerisms. The internet dubbed him “Daddy Cuomo.”

At Jezebel, Rebecca Fishbein summed up the emerging urban infatuation with the governor: “In this time of crisis, with little concrete information available, I need Cuomo’s measured bullying, his love of circumventing the federal government, his sparring with increasingly incompetent city leadership.”

As the pandemic raged on, the governor seemed to take his role as “Daddy Cuomo” to heart. His tweets became increasingly scolding. In June, he responded to a video of New Yorkers gathered outside at St. Mark’s Place with: “Don’t make me come down there” — the kind of threat kids might expect when they’ve gotten into a particularly loud scuffle.

He brought his daughter to a press conference, frequently ragged on her boyfriend during briefings and even went so far as to put a “boyfriend cliff” on one of the several bizarre COVID-19 posters he commissioned to immortalize his leadership during the pandemic. For Cuomo, the lines between child-rearing and governance are blurred, and New Yorkers are the ones who frequently pay the price.

In the middle of a crisis, New Yorkers don’t need a father, doling out snarky one-liners in white New Balance cross-trainers while implementing petty punishments. They need a leader who makes smart and calculated choices that don’t completely hamstring their ability to make a living. When he is acting as governor, Cuomo should take off his Dad hat and treat New Yorkers like adults.