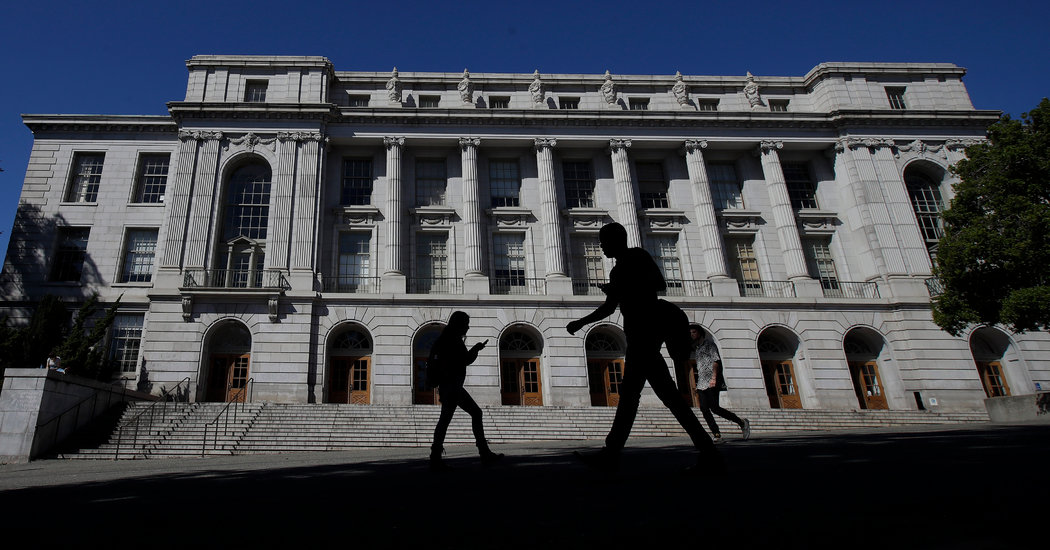 The change is expected to accelerate the momentum of American colleges away from the tests, amid concern that they are unfair to poor, black and Hispanic students.

The University of California, Berkeley, in March. A push to do away with standardized testing has gained momentum in recent years.Credit…Jeff Chiu/Associated Press

SACRAMENTO — The University of California on Thursday voted to phase out the SAT and ACT as requirements to apply to its system of 10 schools, which include some of the nation’s most popular campuses, in a decision with major implications for the use of standardized tests in college admissions.

The school system’s action, which follows many small liberal arts colleges, comes as the ACT and the College Board, a nonprofit organization that administers the SAT, are suffering financially from the cancellation of test dates during the coronavirus pandemic. One critic of the industry estimated that the College Board had lost $45 million in revenue this spring.

Although many students will likely continue to take the exams as long as they are required by highly competitive schools like Stanford and those in the Ivy League, California’s decision will clearly damage the image of the tests, experts said, which could aid in lawsuits and other efforts to eliminate them.

“The University of California is one of the best institutions in the world, so whatever decision they make will be extraordinarily influential,” said Terry W. Hartle, senior vice president at the American Council on Education, a trade group. “Whatever U.C. does will have ripple effects across American higher education, particularly at leading public universities.”

Like many colleges nationwide, University of California schools had already made the SAT and ACT optional for this year’s applicants, after testing dates were disrupted by the pandemic. Both companies have announced that they will introduce an online testing option for the first time in the fall.

On Thursday, the California system’s governing board voted unanimously to extend that optional period for another year, and then not consider scores for two years when determining whether to accept in-state applicants, using standardized tests only to award scholarships, determine course placement and assess out-of-state students.

In 2025, consideration of the SAT or ACT for any student’s admission, in or out of state, would be eliminated.

“These tests are extremely flawed and very unfair,” said Lt. Gov. Eleni Kounalakis, a member of the board who supported the decision, adding, “Enough is enough.”

In the meantime, the university will do a study on the feasibility of creating its own admissions test, perhaps in collaboration with other California schools.

In a statement after the vote, the College Board predicted that the governing board’s decision would add to the burden of high school students applying for college if the system creates its own exam, saying that many students will still take the SAT or ACT to apply to other institutions.

“Having to take multiple tests will likely cause many of these students to limit their college options much earlier in the college search process,” the organization said.

Some 300,000 students attend University of California schools, and six of its campuses top the list of American schools with the most applicants, with U.C.L.A. consistently the most sought after. Four-fifths of applicants to the system’s schools take the SAT, providing the largest source of customers for the College Board, which brings in more than $1 billion a year in revenue.

In addition to the SAT, the organization also administers Advanced Placement tests for high school students and other testing programs. Experts said that despite actions like the California system’s, the testing industry is likely to survive in some form.

“Standardized testing has been declining as an element in the college admissions process for some time,” Mr. Hartle said. “But the College Board is a large and financially stable organization, and they’ve been around for a long time.”

The move to do away with testing only deepened after last year’s college admissions scandal. More than 1,230 colleges and universities have made the SAT and ACT optional for admission, according to FairTest, a group that has pushed to end testing requirements — most of them small liberal arts colleges such as Smith, Pitzer and Sarah Lawrence.

Another 70 or so colleges and universities suspended the testing requirement for the fall application cycle because of the coronavirus.

In California, the board acted Thursday on a proposal from the university system’s president, Janet Napolitano, which came after several years of pressure. A lawsuit filed last year by a largely black school district in Compton, Calif., and a coalition of students and advocacy groups argues that the time-honored tests discriminate based on race and income.

The decision, however, ran counter to a recommendation from the system’s faculty senate, which voted in April to keep the SAT and ACT. A faculty task force commissioned to study the impact of standardized tests found that they predict college success within the University of California system more effectively than high school grades or other measures.

In fact, the task force found that in many cases the tests gave a leg up to black, Latino and low-income students by offering an additional metric for admissions officers who might have rejected them because their grades did not meet the university’s threshold.

Robert May, a philosophy professor at the University of California, Davis, who appointed the faculty panel, said the regents’ decision would add confusion and significant costs to the admissions process at the mammoth system, and make admissions determinations even more subjective in the short-term.

Marten Roorda, the chief executive of the ACT, told the regents in a letter before the vote that dropping the testing requirements would “further the uncertainty and anxiety of students and their families at a time when they need all the reassurances and resources we can provide.”

Supporters of standardized tests have argued that they provide an important yardstick to assess students across disparate school districts and states. And the College Board and ACT say any inequities in their results reflect existing gaps in the American educational system, and are not a fault of the tests themselves.

In response to criticism, the College Board proposed a new SAT grading system last year that came to be known as the “adversity score,” which would put each test taker’s results into the context of that student’s school or neighborhood. But the company withdrew that proposal after being criticized for trying to distill complex factors into a single score.

Testing opponents marked a major victory two years ago when the highly ranked University of Chicago went test optional. The school reported last year that the entering freshman class had nearly a quarter more first-generation and low-income students and 56 percent more rural students than the prior year, with about 10 percent opting against submitting test scores.

In the University of California system, standardized test scores are just one component of a complex admissions formula, which includes more than a dozen metrics, including high school grade point averages. The state guarantees acceptance to the top 12.5 percent of California high school students.

But as California has struggled to maintain campus diversity since voters passed a 1996 ban on affirmative action, pressure has grown for the school system to take action. Its top campuses have become almost as difficult to get into as some Ivy League schools and are demographically dominated by white and Asian students.

Carol Christ, now the Berkeley chancellor, was one of the first university administrators to eliminate the SAT requirement nearly two decades ago when she became president of Smith College. On Thursday, she told the regents that she viewed standardized testing as “a biased instrument” that would only become more skewed in the wake of the pandemic.