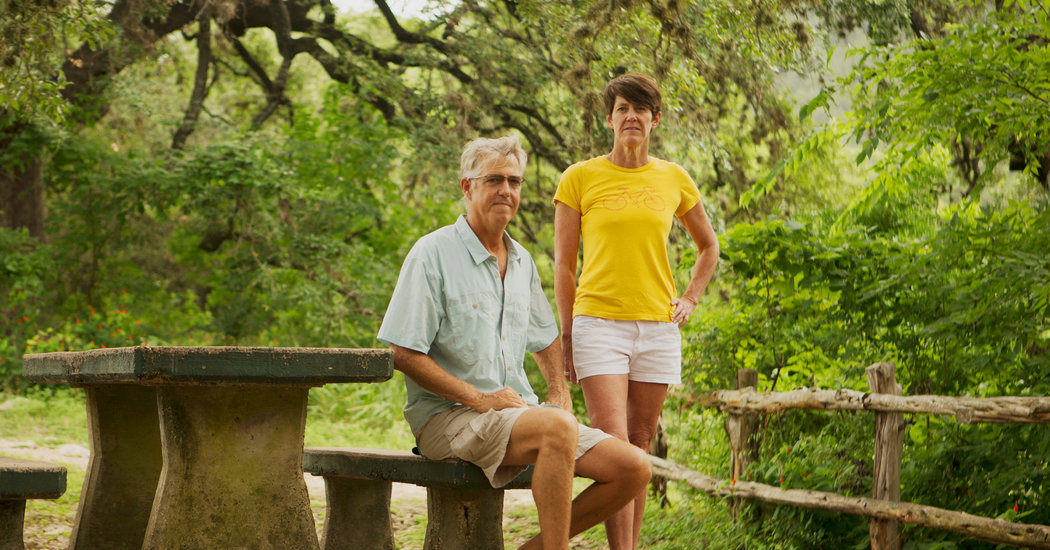 It’s an example of the unpredictable way health prices can vary for patients who receive identical care.

Image As a precaution before a camping trip, Jimmy Harvey and Pam LeBlanc were tested for coronavirus at the same place in Austin. Their financial experiences, though, were very different.Credit…Mary Inhea Kang for The New York Times

Before a camping and kayaking trip along the Texas Coast, Pam LeBlanc and Jimmy Harvey decided to get coronavirus tests. They wanted a bit more peace of mind before spending 13 days in close quarters along with three friends.

The two got drive-through tests at Austin Emergency Center in Austin. The center advertises a “minimally invasive” testing experience in a state now battling one of the country’s worst coronavirus outbreaks. Texas recorded 5,799 new cases Sunday, and recently reversed some if its reopening policies.

They both recalled how uncomfortable it was to have the long nasal swab pushed up their noses. Ms. LeBlanc’s eyes started to tear up; Mr. Harvey felt as if the swab “was in my brain.”

Their tests came back with the same result — negative, allowing the trip to go ahead — but the accompanying bills were quite different.

“I assumed, like an idiot, it would be cheaper to use my insurance than pay cash right there,” Ms. LeBlanc said. “This is 32 times the cost of what my friend paid for the exact same thing.”

Ms. LeBlanc’s health insurer negotiated the total bill down to $1,128. The plan said she was responsible for $928 of that.

During the pandemic, there has been wide variation between what providers bill for the same basic diagnostic test, with some charging $27, others $2,315. It turns out there is also significant variation in how much a test can cost two patients at the same location.

Mr. Harvey and Ms. LeBlanc were among four New York Times readers who shared bills they received from the same chain of emergency rooms in Austin. Their experiences offer a rare window into the unpredictable way health prices vary for patients who receive seemingly identical care.

Three paid with insurance, and one with cash. Even after negotiations between insurers and the emergency room, the total that patients and their insurers ended up paying varied by 2,700 percent.

Such discrepancies arise from a fundamental fact about the American health care system: The government does not regulate health care prices.

Some academic research confirms that prices can vary within the same hospital. One 2015 paper found substantial within-hospital price differences for basic procedures, such as M.R.I. scans, depending on the health insurer.

The researchers say these differences aren’t about quality. In all likelihood, the expensive M.R.I.s and the cheap M.R.I.s are done on the same machine. Instead, they reflect different insurers’ market clout. A large insurer with many members can demand lower prices, while small insurers have less negotiating leverage.

Because health prices in the United States are so opaque, some researchers have turned to their own medical bills to understand this type of price variation. Two health researchers who gave birth at the same hospital with the same insurance compared notes afterward. They found that one received a surprise $1,600 bill while the other one didn’t.

The difference? One woman happened to give birth while an out-of-network anesthesiologist was staffing the maternity ward; the other received her epidural from an in-network provider.

“The additional out-of-pocket charge on top of the other labor and delivery expenses was left entirely up to chance,” the co-authors Erin Taylor and Layla Parast wrote in a blog post summarizing the experience. Ms. Parast, who received the surprise bill, ultimately got it reversed but not until her baby was nearly a year old.

The Trump administration has taken steps to limit patients’ out-of-pocket costs for coronavirus testing and treatment, using relief funds to reimburse providers for uninsured patients’ bills. Insurers are required to cover patients’ coronavirus tests with no cost-sharing or co-payments. Alex Azar, the health and human services secretary, reiterated that commitment in a Sunday interview on CNN, saying, “If you are uninsured, it will be covered by us.”

The testing experience of the Texas group suggests that it doesn’t always work out that way. Some emergency rooms charge cash prices and tack on testing fees that insurers are not required to cover. In this case, the patient who paid cash actually got the best deal. Mr. Harvey has health insurance but felt it would be a “hassle” to use it for the coronavirus test. So he paid for his test with two $100 bills after receiving the nasal swab, and was on his way.

Ms. LeBlanc let the emergency room take a photograph of her insurance card. She ended up with $6,408 in charges, mostly from an outside lab called Genesis Laboratory that handled her testing. She received explanation-of-benefit statements suggesting she would owe more than $1,000.

Jay Lenner, who also got a drive-through test from the same provider, used his insurance and received a similarly long list of charges. He recalls a provider saying he’d be tested only for coronavirus, but bill records show he was also screened for Legionnaires’ disease, herpes and enterovirus, among other things.

The emergency room also charged him $1,684 for using its facility and $634 to see one of its doctors. All told, he ended up with $5,649 in bills, of which his insurance plan paid $4,914. Mr. Lenner didn’t end up on the hook for any of it, but he’s still frustrated. “Ultimately, we pay for this in higher premiums,” he said.

Michelle Tribble, a spokeswoman for Austin Emergency Center, said it needed to charge high prices because insurers often pay only a small share of their fees.

Austin Emergency Center and Genesis Laboratory had differing explanations for why patients like Mr. Lenner were screened for so many conditions. Ms. Tribble said “the lab makes the determination” of what to test for. Edward Cienki, a spokesman for the laboratory, said, “Genesis does not order clinical laboratory tests.”

Ms. LeBlanc learned of the discrepancy only because her husband happened to be on the phone with Mr. Harvey when a price estimate from her insurer arrived in the mail. Mr. Harvey said, “I hear Pam in the background saying, ‘What the heck is this?’”

She used the information about what her friend had paid to negotiate her charges down to $199 as well. And after she reached out to a local television station, which devoted a segment to her charges, her health plan began investigating the bill.

Last Thursday, after returning from another camping trip, Ms. LeBlanc learned the bill would be dropped entirely.

Swimming With the Sea Lions of Los Islotes