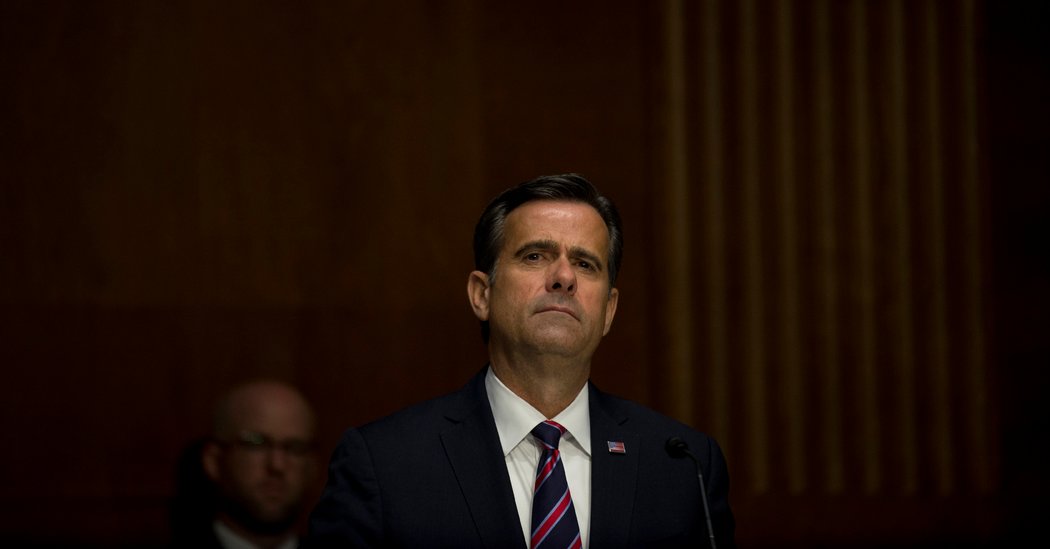 The investigation into Russia’s suspected operation is said to focus in part on the killings of three Marines in a truck bombing last year, officials said.

American officials provided a written briefing in late February to President Trump laying out their conclusion that a Russian military intelligence unit offered and paid bounties to Taliban-linked militants to kill U.S. and coalition troops in Afghanistan, two officials familiar with the matter said.

The investigation into the suspected Russian covert operation to incentivize such killings has focused in part on an April 2019 car bombing that killed three Marines as one such potential attack, according to multiple officials familiar with the matter.

The new information emerged as the White House tried on Monday to play down the intelligence assessment that Russia sought to encourage and reward killings — including reiterating a claim that Mr. Trump was never briefed about the matter and portraying the conclusion as disputed and dubious.

But that stance clashed with the disclosure by two officials that the intelligence was included months ago in Mr. Trump’s President’s Daily Brief document — a compilation of the government’s latest secrets and best insights about foreign policy and national security that is prepared for him to read. One of the officials said the item appeared in Mr. Trump’s brief in late February; the other cited Feb. 27, specifically.

Moreover, a description of the intelligence assessment that the Russian unit had carried out the bounties plot was also seen as serious and solid enough to disseminate more broadly across the intelligence community in a May 4 article in the C.I.A.’s World Intelligence Review, a classified compendium commonly referred to as The Wire, two officials said.

A National Security Council spokesman declined to comment on any connection between the Marines’ deaths and the suspected Russian plot. The White House press secretary, Kayleigh McEnany, did not answer when pressed by reporters on Monday whether the intelligence was included in the written President’s Daily Brief, and the security council spokesman pointed to her comments when asked later about the February written briefing.

Late Monday, John Ratcliffe, the recently confirmed director of national intelligence, issued a statement warning that leaks about the matter were a crime.

“We are still investigating the alleged intelligence referenced in recent media reporting, and we will brief the president and congressional leaders at the appropriate time,” he said. “This is the analytic process working the way it should. Unfortunately, unauthorized disclosures now jeopardize our ability to ever find out the full story with respect to these allegations.”

The disclosures came amid a growing furor in Washington over the revelations in recent days that the Trump administration had known for months about the intelligence conclusion but the White House had authorized no response to Russia.

Top Democrats in the House and Senate demanded all members of Congress be briefed, and the White House summoned a small group of House Republicans friendly to the president to begin explaining its position.

The lawmakers emerged saying that they were told the administration was reviewing reporting about the suspected Russian plot to assess its credibility, and that the underlying intelligence was conflicting, echoing comments from Ms. McEnany that the information in the assessment had not been “verified” because, she said without detail, there were “dissenting opinions” among analysts or agencies.

But in denying that Mr. Trump was briefed, administration officials have been coy about how it is defining that concept and whether it includes both oral briefings and the President’s Daily Brief. “He was not personally briefed on the matter,” Ms. McEnany told reporters when asked specifically about the written briefing. “That is all I can share with you today.”

Mr. Trump is said to often neglect reading that document, preferring instead to receive an oral briefing summarizing highlights every few days. Even in those face-to-face meetings, he is particularly difficult to brief on national security matters. He often relies instead on conservative media and friends for information, current and former intelligence officials have said.

American intelligence officers and Special Operations forces in Afghanistan began raising alarms as early as January, and the National Security Council convened an interagency meeting to discuss the problem and what to do about it in late March, The Times has previously reported. But despite being presented with options, including a diplomatic protest and sanctions, the White House authorized no response.

The administration’s explanations on Monday, in public and in private, appeared to be an attempt to placate lawmakers, particularly Mr. Trump’s fellow Republicans, alarmed by news reports in recent days revealing the existence of the intelligence assessment and Mr. Trump’s insistence he had not been warned of the suspected Russian plot.

The assessments pointing to a Russian scheme to offer bounties to Taliban-linked militants and criminals were based on information collected in raids and interrogations on the ground in Afghanistan, where military American commanders came to believe Russia was behind the plot, as well as more sensitive and unspecified intelligence that came in over time, an American official said.

Notably, the National Security Agency, which specializes in hacking and electronic surveillance, has been more skeptical about interrogations and other human intelligence, officials said.

Typically, the president is formally briefed when the information has been vetted and seen as sufficiently credible and important by the intelligence professionals. Such information would most likely be included in the President’s Daily Brief.

Former officials said that in previous administrations, accusations of such profound importance — even if the evidence was not fully established — were conveyed to the president. “We had two threshold questions: ‘Does the president need to know this’ and ‘why does he need to know it now,’” said Robert Cardillo, a former senior intelligence official who briefed President Barack Obama from 2010 to 2014.

David Priess, a former C.I.A. daily intelligence briefer and the author of “The President’s Book of Secrets: The Untold Story of Intelligence Briefings to America’s Presidents,” said: “Many intelligence judgments in history have not had the consensus of every analyst who worked on it. That’s the nature of intelligence. It’s inherently dealing with uncertainty.”

Both Mr. Cardillo and Mr. Priess said previous presidents received assessments on issues of potentially vital importance even if they had dissents from some analysts or agencies. The dissents, they said, were highlighted for the president to help them understand uncertainties and the analytic process.

Lawmakers demanded to see the underlying material for themselves.

“This is a time to focus on the two things Congress should be asking and looking at: No. 1 Who knew what, when, and did the commander in chief know? And if not, how the hell not?” said Senator Ben Sasse, Republican of Nebraska and a member of the Senate Intelligence Committee.

Speaker Nancy Pelosi and Senator Chuck Schumer of New York, the Democratic leaders of the House and Senate, each requested that all lawmakers be briefed on the matter and for C.I.A. and other intelligence officials to explain how Mr. Trump was informed of intelligence collected about the plot.

The White House began explaining its position directly to lawmakers in a carefully controlled setting. Mark Meadows, the White House chief of staff; John Ratcliffe, the director of national intelligence; and Robert C. O’Brien, Mr. Trump’s national security adviser, briefed a handful of invited House Republicans. A group of House Democrats was scheduled to go to the White House on Tuesday morning to receive a similar briefing.

There was no indication after the session with Republicans whether they had been told that the information was included in Mr. Trump’s written briefing four months ago. But afterward, two of the Republicans — Representatives Liz Cheney of Wyoming and Mac Thornberry of Texas — said that they “remain concerned about Russian activity in Afghanistan, including reports that they have targeted U.S. forces” and would need additional briefings.

“It has been clear for some time that Russia does not wish us well in Afghanistan,” they said in a joint statement. “We believe it is important to vigorously pursue any information related to Russia or any other country targeting our forces.”

Other Republicans who attended the briefing were more sanguine. In an interview, Representative Chris Stewart of Utah said that he saw nothing unusual about the purported decision not to orally inform Mr. Trump, particularly when the situation did not require the president to take immediate action.

“It just didn’t reach the level of credibility to bring it to the president’s attention,” he said, adding that military and intelligence agencies should continue to scrutinize Russia’s activities.

They were killed when a vehicle laden with explosives hit their truck, wounding an Afghan contractor as well. The huge blast set fire to the truck, engulfing those inside in flames, while their fellow Marines tried to extricate them, a defense official said. A brief firefight ensued.

Gen. Zaman Mamozai, the former police chief of Parwan Province, where Bagram Airfield is, said that the Taliban there hire freelancers from local criminal networks, often blurring the lines of who carried out what attacks. He said the Taliban’s commanders were only based in two districts of the province, Seyagird and Shinwari, and from there they coordinate a more extensive network that largely commissions the services of criminals.

The Taliban have denied involvement. And a spokesman for President Vladimir V. Putin of Russia, Dmitry Peskov, told NBC News on Monday that reports of the Russian scheme were incorrect. He said that “none of the American representatives have ever raised this question with their Russian counterparts through government or diplomatic channels.”

The Pentagon’s chief spokesman, Jonathan Hoffman, declined to comment on any connection between the Marines’ deaths and the suspected Russian plot. Mr. Hoffman also declined to say whether or when Defense Secretary Mark T. Esper was briefed on the intelligence assessment and whether the deaths of American troops in Afghanistan resulted from the Russian bounties. Col. DeDe Halfhill, a spokeswoman for Gen. Mark A. Milley, the chairman of the Joint Chiefs of Staff, also declined to comment on the same questions.

What Do You Do When Extremism Comes for the Hawaiian Shirt?

Museums Are Finally Taking a Stand. But Can They Find Their Footing?

How Will the Protest Movement Evolve?