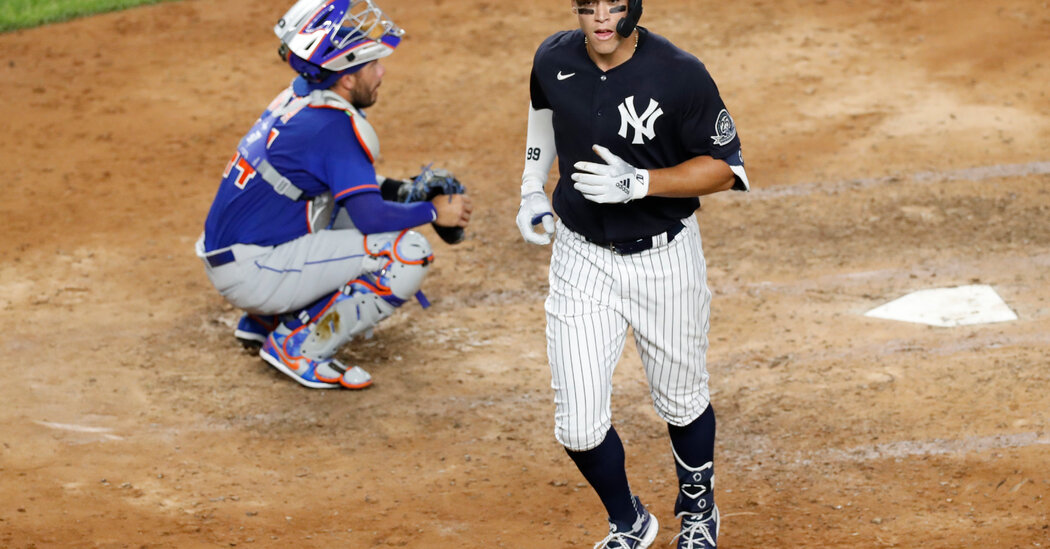 After the postponement of their weekend series with the Mets and then a rainout on Tuesday, the Yankees are facing 22 games in 19 days, including four doubleheaders.

Aaron Judge, back from a right calf injury, was supposed to be in the Yankees’ lineup on Tuesday night in Atlanta. The rainout there set up a doubleheader on Wednesday.Credit…Kathy Willens/Associated Press

The Yankees were supposed to take the field for the first time in five days on Tuesday night, against the Braves in Atlanta. Then a rainstorm disrupted their season again, forcing a postponement that extended the Yankees’ layoff to six consecutive days and clogged their schedule even more in the coming weeks.

Breaks in baseball, a sport meant to be played almost every day of the season, are not supposed to last this long. The 2020 season, though, is anything but normal.

Twice in this season, the Yankees, who have a 16-9 record, had to pause their schedule for multiple days because of the coronavirus. After the Miami Marlins’ outbreak late last month, the Yankees spent two days in a Philadelphia hotel unable to play the Phillies, who were sidelined for a week because of their exposure to the Marlins.

Over the past weekend, the Yankees hosted workouts for their players at Yankee Stadium while Mets players and staff members were tested and quarantined. A Mets player and a staff member tested positive for the coronavirus on Thursday, which postponed the first installment of their annual subway series, a three-game set at Citi Field.

“I’ve actually been surprised we haven’t had more, honestly,” Yankees reliever Zack Britton said of the interruptions to the team’s schedule.

Completing an abbreviated 60-game season across 30 different cities during a pandemic was always going to be a challenge. The Cincinnati Reds, the St. Louis Cardinals, the Marlins and the Mets are the four teams in Major League Baseball that have dealt with positive cases since the season began on July 23.

But now, because of the postponements, the Yankees — a team dealing with myriad injuries that they believe have arisen partly because of the condensed calendar — have even more cramming to do. After Tuesday’s rainout, which set up a doubleheader on Wednesday, they were facing 22 games in 19 days, including four doubleheaders. Even with expanded rosters, that is a lot of innings.

This weekend at Yankee Stadium, the Yankees and Mets will make up two of last weekend’s postponed games, with a doubleheader on Friday and another on Sunday. Doubleheaders this season mercifully feature seven-inning games.

“If you’re swinging the bat well, doubleheaders are the best thing to a ballplayer,” outfielder Aaron Judge said over the weekend.

Before he landed on the 10-day injured list on Aug. 14, Judge was indeed swinging the bat like one of the best hitters in baseball. But a right calf injury arose as Judge played both games of a doubleheader against the Tampa Bay Rays on the artificial turf at Tropicana Field. The doubleheader was one of the ripple effects from the Marlins’ outbreak.

Judge, who did not consider the injury serious, was in the lineup for the Yankees on Tuesday. Even though he told Manager Aaron Boone he felt ready to be in right field in all of the team’s remaining 35 games, he said the Yankees might be judicious with his playing time in one of the coming doubleheaders.

Sports and the Virus

Here’s what’s happening as the world of sports slowly comes back to life:

“2020, baby,” Boone said of the upcoming doubleheaders. “We’ve got to figure it out. It’s a challenge. Obviously seven-inning games makes it a little more doable and not as daunting. But there’s no question we’re heading into a tough stretch here.”

Boone has tried to be conscientious about players’ workloads, but injuries are piling up again. In their 103-win regular season last year, the Yankees set a major league record by sending 30 different players to the I.L. Less than halfway through this season, they have outpaced themselves: 13 different players have landed on the I.L., with nine currently absent. Because of that, and the Aug. 31 trade deadline, the Yankees’ front office has been considering additions to the pitching staff.

James Paxton, who strained a muscle in his left forearm while on the mound last week, and shortstop Gleyber Torres, who strained left quadriceps and hamstring muscles while running to first base last week, were the latest to join the Yankees’ wounded. Both will be out for at least a few weeks.

One possible factor behind the rash of injuries, according to Paxton and Britton, who landed on the I.L. last week with a left hamstring strain: the short ramp-up period of three weeks leading into the truncated season.

“We didn’t get enough time at a lower speed to build up,” Paxton said. “And now you’re seeing, a few weeks into the season, guys are not fresh anymore and the tiredness is building up. We don’t have that base we normally have.”

Britton, who is the team’s union representative, said he had spoken with his counterparts on almost every other M.L.B. team, and they too have noticed the higher rate of injuries. He believed the smaller, soft-tissue injuries might have been avoided during the gradual buildup of a normal six-week spring training leading into a traditional 162-game season.

(Several baseball and medical experts have expressed fears that the starts and stops of the year — a traditional off-season; spring training suspended on March 12 because of the pandemic; a three-month hiatus in which players were training mostly on their own; and a short period for summer workouts — increased the likelihood of injury.)

For the Yankees, though, the answer to their persistent injury question is made more complicated because they overhauled their health and performance staff, including hiring a noted high-performance trainer, Eric Cressey, in an effort to avoid a repeat of 2019. Britton spoke highly of the retooled staff and their new strategies, such as training players to be better athletes rather than training them specifically for their position.

“For them to implement these programs, it’s hard to do that with the season that we’ve had,” Britton said.

Under Cressey’s guidance, the brawny outfielder Giancarlo Stanton lost 20 pounds since last season and was performing well — until he landed on the I.L. with a left hamstring strain on Aug. 9.

Over the weekend, Boone noted that the overhaul of the Yankees’ health and performance staff was done in January, so there hadn’t even been a full off-season to work with players. Despite the current backlog of injuries, Boone said he remained confident in the people entrusted with the players’ health and training.

“When we look up in a few years, we’ll really start to see the dividends being paid,” he said.

For now, though, the Yankees must contend with returning safely from another stretch without games and a jampacked schedule, and remain watchful of their constantly moving target of health.