The sound of empty cruise ships off Imperial Beach 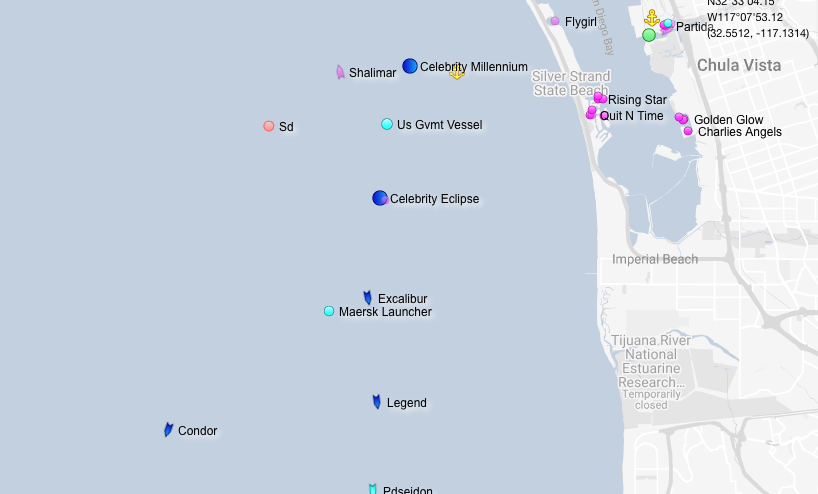 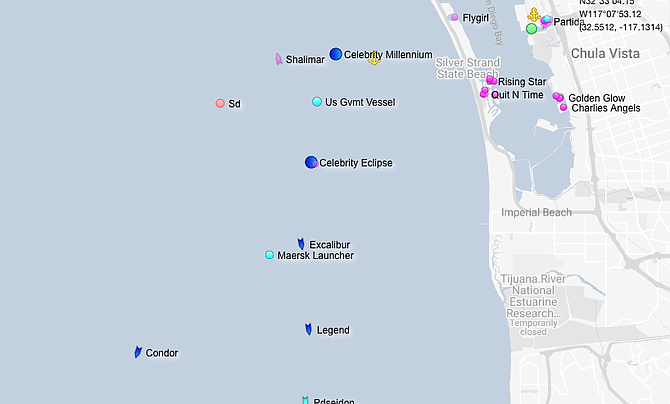 Vessels off the Silver Strand as of Aug. 16

At midnight on August 2, some locals in Imperial Beach woke up to blaring foghorns. 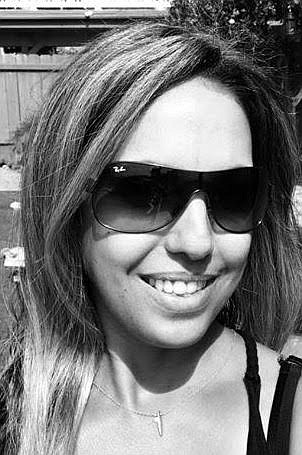 Cristbel Adams: “I thought it was my cell phone.”

“I live two miles away from the beach and the horns [sounded] like the ship was next to my house, it was loud,” said Cristbel Adams. “At the beginning I thought it was my cell phone or my neighbor’s fax machine.”

Adams, a freelance copywriter, mother, and housewife, has lived in IB for about five years.

“I never heard something like this, and the horn was on and off throughout the night.”

“It started around 9 pm [on April 1],” said April Olthoff. “They were loud, but in the distance, and it happened every three minutes, obviously for safety reasons.”

Olthoff, 30, has lived in IB her whole life; she’s never heard the foghorns here either. “I was taking care of my dog after we got home from the emergency vet that night, [we were] up all morning. At about 2-3 am, they sounded farther away as if the ship turned and the horns weren’t facing directly towards shore.”

“It was foggy, and it was zero percent visibility,” Adams continued. “The horns were on and off throughout the night. Some people mentioned it was a Navy ship and other ships, but I don’t know.”

The next morning, at about 8:09, a reporter from ABC 10 News San Diego said: “The dense fog advisory has just expired but we are still seeing overcast skies along our coastline ….”

NF has lived in IB for about 50 years; like Olthoff and Adams, she’s never heard the audible fog warnings here. “It sounds like two ships signaling to one another: [one] short, one long and one medium blast. We’ve never had two cruise ships anchored off the shore for four months. They are making sure the other ship knows where they are.”

IB residents chimed in about the foghorns on their Facebooks. “All boats underway have to blow their horns when fog comes in for nine seconds every two minutes because loss [of] visibility,” said one person, “I just asked my husband who is a boat captain.” Another Facebooker responded that she heard the foghorns in Chula Vista, about eight miles northeast of the IB coastline.

“These ships have nowhere to go and it was still going off around 10 am,” Olthoff said. “I talked to a friend who is a captain on the Disney cruise line, and he said those ships only have staff on them.”

Olthoff and NF referred to the Celebrity’s Eclipse and Millennium cruise ships that’ve been anchored off their city’s shoreline since CDC suspended cruise ships sailings around the U.S. on March 14.

“A third ship, the Disney Wonder, was anchored in San Diego for the first few months of the pandemic, but departed May 30,” ABC News 10 San Diego reported on July 3. “After thousands of passengers disembarked from the Eclipse in late March, test results came back showing several passengers were COVID-19 positive. More than a month later, in May, 63 passengers remained quarantined on the Eclipse with hundreds of crew members.”

“Both ships are down to minimal staffing levels of about 80 crew members to maintain the vessels and keep them operational, reportedly said Royal Caribbean Cruises spokesman Jonathon Fishman. “As of now, they expect to stay in this position through the summer until our return to service plans are finalized.”

ABC News 10 San Diego added, “The ships occasionally pull into port to refuel, but otherwise stay anchored off the coast to avoid port fees that can exceed $10,000 a day.”

As I wrapped up this article on August 16, the Eclipse and Millennium cruise liners were still in our waters, according to marinetraffic.com. The other vessels that were in the nearby vicinity when I checked were a U.S. government vessel, the Legend, Condor and Excalibur passenger vessels, Maersk Launcher, a fishing boat, a tug boat or special craft, and a pleasure craft.

Book Review: The Ballad of Songbirds and Saints by Suzanne Collins

Cardi B interviews Joe Biden and has ‘whole list’ of demands

Mother’s Saloon in OB is closing its doors

Police: Driver, 16, involved in fatal Carlsbad crash was on a provisional license