The Age of Russia is over 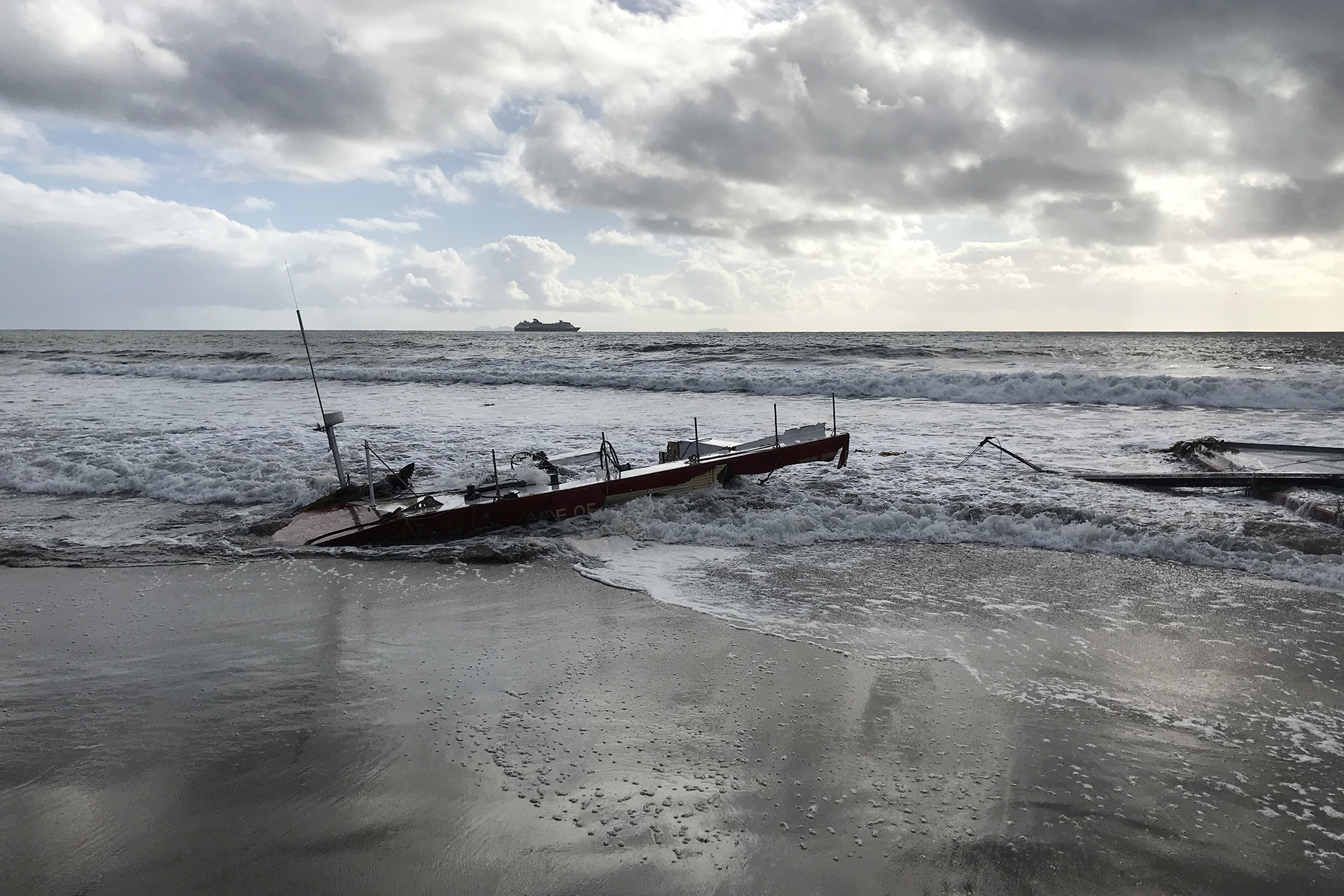 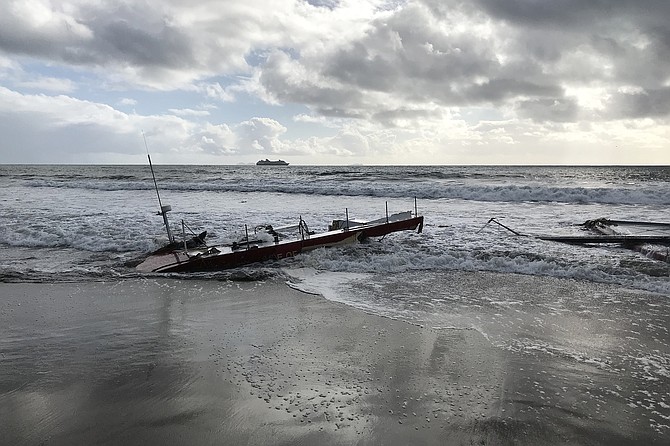 “Property of the United States of America. Seized from the USSR Red Star Syndicate.” The solid wooden info plaque is screwed into the deck near the bow of the shipwreck.

Thanks to last week’s storm, Cold War history has come right to Coronado’s Center Beach. I was taking a Sunday morning walk along the shore when I saw something in the water, and a few people hanging about. It didn’t take long to see it was a wrecked yacht. Tony Potter was one of the people there.

“Yesterday morning, I saw the big red yacht out in the water. Looked like no-one on board. The sails were down, but the mast was up, and it was still intact. And I thought, ‘Oh, maybe the owner will come and get it.’ But then it started to hit against a rock.” 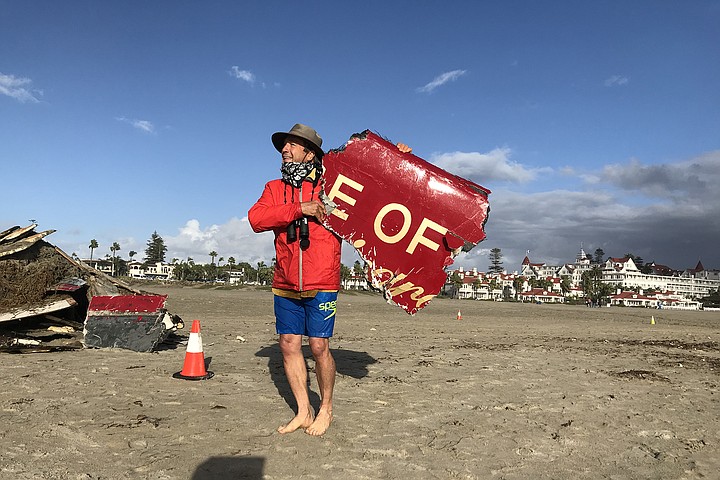 Tony and I are standing in the midst of a pile of broken fiberglass, wires, sails — one with a large red star on it — tangles of different colored ropes, a fallen mast, and a metal boom.

The waves of last week’s storm broke the back of the 72-foot fiberglass hull. Today, she lies here in two halves, like the Titanic.

“So I took some pictures,” Potter’s saying, “and then I saw some Russian writing. And I know a little bit of the Cyrillic alphabet, and I knew it said ‘Russia.’” 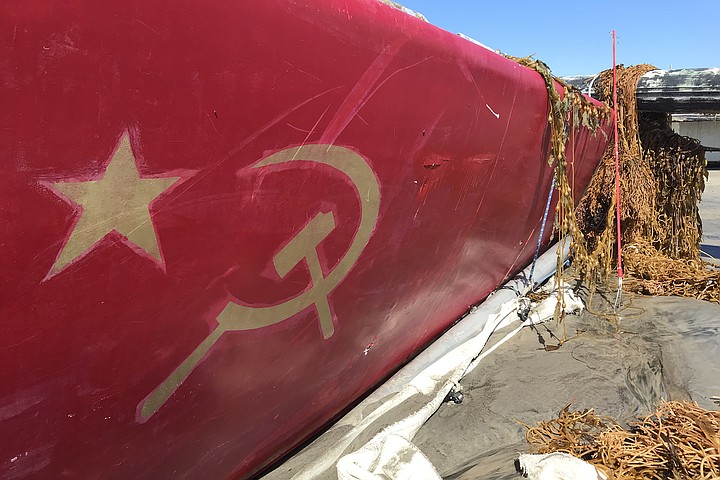 Now he mentions it, you can easily see the hammer and sickle shining out in gold from the red prow.

The tide is pulling back. Now I can walk up to the wooden “seizure” plaque screwed onto the bow section. And I remember 1992, when I was covering the America’s Cup here in San Diego, and this huge Russian military cargo plane, an Antonov 124, lumbered into Lindbergh Field, opened up its maw, and revealed a tiny-looking yacht. Of course, once they wheeled her out, she turned into a fully-fledged 72-foot America’s Cup challenger. Name along one side said Age of Russia. It represented the Yacht Club of Leningrad/St Petersburg, one of the oldest sailing clubs in the world. Kind of appropriate, because the America’s Cup is the oldest trophy in international sport. 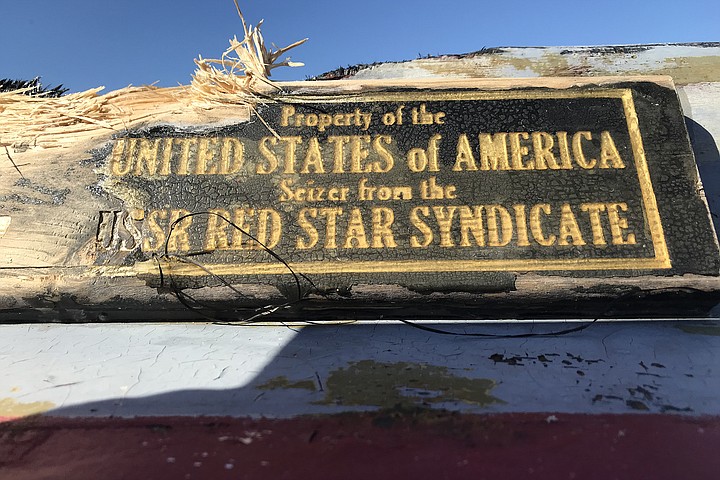 US Government’s notice of seizure.

“End of the Cold War, dude,” said my friend Joe, as we wandered in the cavernous fuselage of the Antonov. “Before, they sent missiles, now they’re sending yachts.”

And at least to us, young freelancers, seeing the Age of Russia, gleaming scarlet and gold as she rolled out into the sun, it seemed like that: the beginning of a new age.

Except it didn’t happen so easily. The U.S. Navy wouldn’t allow the Russian yacht to sail in San Diego Bay. What if it was actually a secret spy yacht, sent to reconnoiter military targets? In the end, Age of Russia never sailed a single race for the Auld Mug, as the America’s Cup is called. And the U.S. Government seized her.

“This boat had a hard time from beginning to end,” says Tony Potter. “They wouldn’t let her race, and in the end the Russian syndicate didn’t have enough money to send her back. Or her crew. Half of them were stranded here.”

It was sad. The “Russian Spring” came and went. And, far from home, Age of Russia slipped her moorings, and drifted onto a beach to die.

Climate Change Devastated Dinosaurs Not Once, But Twice

Cigarette smokers across the border take a hit