She Dived More Than 300 Feet Under the Sea. Can She Go Deeper? 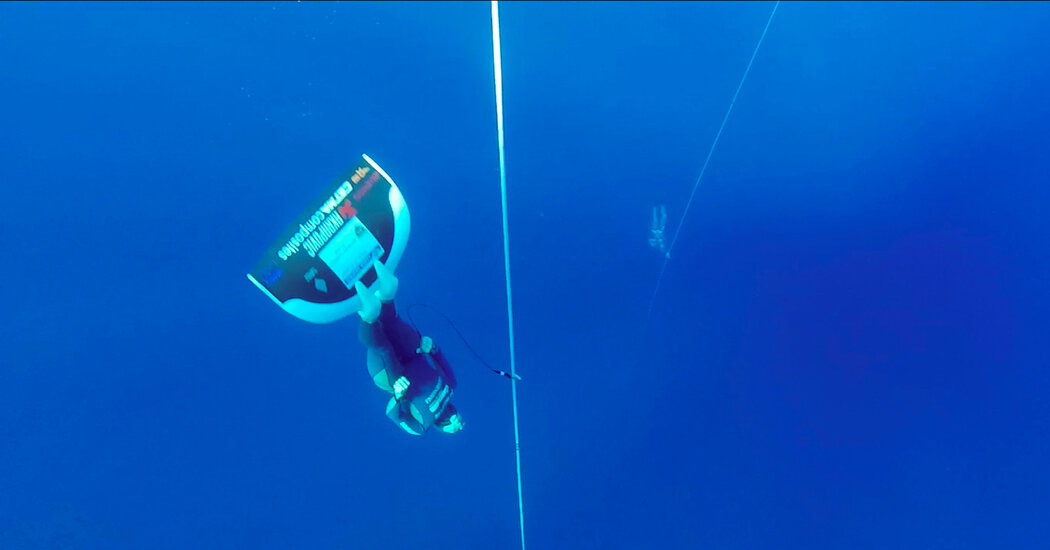 Alenka Artnik of Slovenia recently set a record in free diving. But her race to the bottom may not be over. 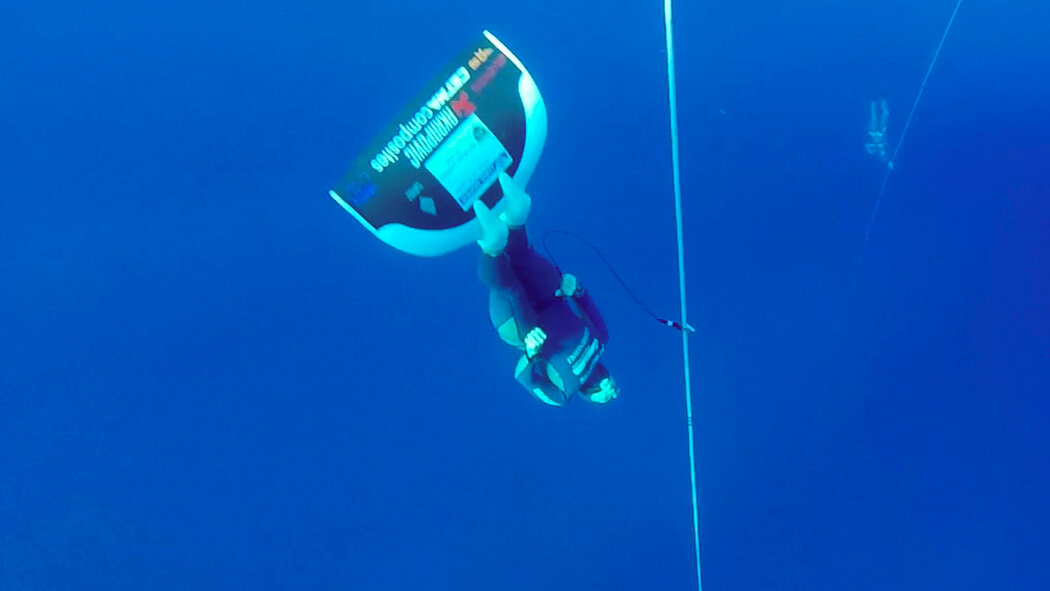 One morning this month, on the warm waters of the Red Sea off the coast of Egypt, Alenka Artnik donned a thin purple wet suit and a monofin, secured a four-pound weight around her neck, and fastened herself to a thin line she held loosely in one hand.

Then she dived. Deep, with no mask or goggles but with her nostrils clamped. The line extended 114 meters (374 feet) below the surface and, holding her breath, Artnik was determined to get to the bottom of it and come back up under her own power. If successful she would set a new world record.

This feat was not for the faint of heart, or lung.

Nicholas Mevoli, the first American to break the 100 meter barrier with a monofin in a so-called free dive, died while attempting to break a second American record in the sport seven years earlier, after surfacing with a lung injury. Natalia Molchanova, a 41-time world-record holder and 23-time world champion — widely considered the greatest free diver of all time — vanished during a training dive in Spain less than two years later.

But after a sleepless night, Artnik, a 39-year-old Slovenian, wasn’t focused on danger or death. She needed to remain present and calm. Just after 8 a.m., Artnik packed her lungs with air and descended, kicking down into the inky blue.

There are three recognized depth categories in the sport of competitive free diving. In “free immersion,” athletes pull themselves along a rope down to depth and back without wearing fins. In “constant no fins,” athletes use a modified breaststroke. In “constant weight,” the one in which Artnik sought her world record, divers dolphin-kick to depth and back wearing a monofin. It’s the deepest discipline and the most celebrated. Any weights used to help them sink, must return to the surface with them or they will be disqualified.

In deep water, barometric pressure cranks up roughly every 10 meters, or approximately 33 feet. At 20 meters, Artnik’s lungs were compressed to a third of their normal capacity, so she moved the air she’d need to equalize her sinuses from her lungs into her mouth. That’s what divers call a mouth fill. If any air escapes through their lips, diving deep becomes impossible without injury.

Involuntary physiological changes were triggered by the pressure as well. As her lungs continued to compress, blood flow shifted from her arms and legs into her core. Her pulse slowed to half her resting rate as her body adapted to use the oxygen in her bloodstream more efficiently, to keep her alert and alive. That’s all part of what scientists have called the mammalian diving reflex, as a similar response occurs in seals, dolphins and whales.

At 70 meters, Artnik closed her eyes, stopped finning and the momentum sucked her down like a tractor beam. She surrendered to the free-fall, knowing it’s best not to think or move at all. Thoughts require oxygen. Stress torches it. As she sank deeper the increased pressure made her feel as though she was being hugged by the ocean.

“I definitely felt like I belonged there in that moment,” Artnik said. “It felt so right.”

Yet by the time the alarm on her dive watch chimed at 109 meters, five meters above her target depth, she’d been underwater for almost two minutes. She opened her eyes, and when she reached the end of the line at 114 meters, grabbed one of the fluttering tags at the end it, turned and started her ascent toward the surface. To reach light and air again, she’d have to swim against the weight of the water, which feels like swimming against a current.

Her next breath was still almost two minutes away.

Artnik didn’t discover free diving until she was 30 years old. At the time, she was managing a skate shop in Slovenia, and lacked purpose. “I was drinking quite a lot and sort of sabotaging myself,” she said. “I felt that I had something more to give.”

In December 2011, on a lark she jumped into a pool workout where a group of seven beginners and intermediate free divers performed underwater laps. She held her breath and joined them. She was hooked immediately. She took her first free diving course in the open water the following spring and reached 28 meters (92 feet) in the Mediterranean Sea.

After her father died in 2013 and the skate shop went out of business in 2015, Artnik sold her family house and traveled to Egypt, training in deep water full time. Back then her personal best was 49 meters (161 feet).

When Molchanova disappeared, she was the only woman to have surpassed 100 meters, setting the world record at 101 meters (331 feet). Her death left a void at the top of the sport, especially among women. But in May 2018, Alessia Zecchini of Italy pushed the mark to 105 meters (344 feet). Later that year, Artnik shocked much of the free diving world by matching it. Days later, Zecchini extended the record to 107 meters (351 feet).

In August 2019, Artnik broke Zecchini’s world record for the first time at the CMAS World Championships in Roatán, Honduras, with a dive to 111 meters (364 feet). By the end of that event Artnik and Zecchini held the record together at 113 meters (371 feet).

The two have become close as they have electrified women’s free diving by hitting depths even the great Molchanova never approached. They were expected this year to continue to push the limits of the sport and one another. But the pandemic forced the cancellation of competitions from Europe to Asia to the Caribbean. Nationwide lockdowns made training difficult.

In late September, when a buzz rippled through the European free diving community that Egypt was open for business, Artnik and dozens of other European athletes flew in to train in the Red Sea. Artnik spent weeks diving every other day and getting progressively deeper. By late October, she felt she could get the record.

Andrea Zuccari, the owner of a free dive shop in Sharm el Sheikh that caters to advanced divers, set up the competition with just two weeks’ notice as a vehicle for Artnik’s record attempt. A team of sanctioned judges flew in to certify the dives. The rest was up to Artnik.

Artnik with Andrea Zuccari, the organizer of the dive, and safety divers and judges after her feat.Credit…Nanna Kreutzmann

What makes Artnik such an impressive athlete is her ability to tap into power while moving with effortless fluidity. Tito Zappalá was Artnik’s deep safety diver for her record attempt. He had been one of her safety divers throughout her time in Sharm, and on Nov. 7, rode an underwater scooter to 60 meters to meet her and monitor her ascent. He marveled as he watched her glide toward the surface, her eyes closed. She reminded him of something the renowned Italian free diving pioneer Enzo Maiorca used to say.

“Try and be like milk in the water. Dissolve yourself in water,” Zappalá said. “She’s like this. She has the feeling. She has the big connection with the sea.”

The ascent is the most perilous part of any deep dive because when divers’ oxygen levels get too low, which can happen on dives that extend beyond three minutes, they are at risk of blacking out. Safety divers are trained to pick up on signs of hypoxia and, if they feel a diver is in danger, grab and ferry them to the surface.

But when a second safety diver joined them at 30 meters, Artnik continued to swim with purpose and control. A third safety diver met them at 10 meters, and Artnik still did not crack. She finned just three more times and calmly floated to the surface after a dive of three minutes and 41 seconds.

She gripped the line and took sharp inhalations to promote re-oxygenation. Then performed the necessary surface protocols for the judge. When a diver pushes their limits, these seemingly simple tasks can become impossible because of a loss of motor control or consciousness. Artnik removed her nose clip, showed the judge her tag and flashed the OK sign, like she’d just jogged around the block. She said the magic words softly but clearly, “I’m OK.”

When the judge flashed his white card signaling a record, the safeties and the small band of athletes and spectators erupted in cheers and pounded the water into a froth. Her exit was so clean that when Zecchini watched the video, even she was in awe.

In fact, Artnik’s commanding performance suggests — even as a world-record holder who has helped push women’s free diving to a level few considered possible five years ago — she has even more to give.

That she could go deeper still.

At the Olympics in Bombed-Out London, She Forever Changed Women’s Sports

In a time of COVID-19, ‘Obamacare’ still part of the action

N.B.A. Ironmen Cling to Routine During the Load Management Era