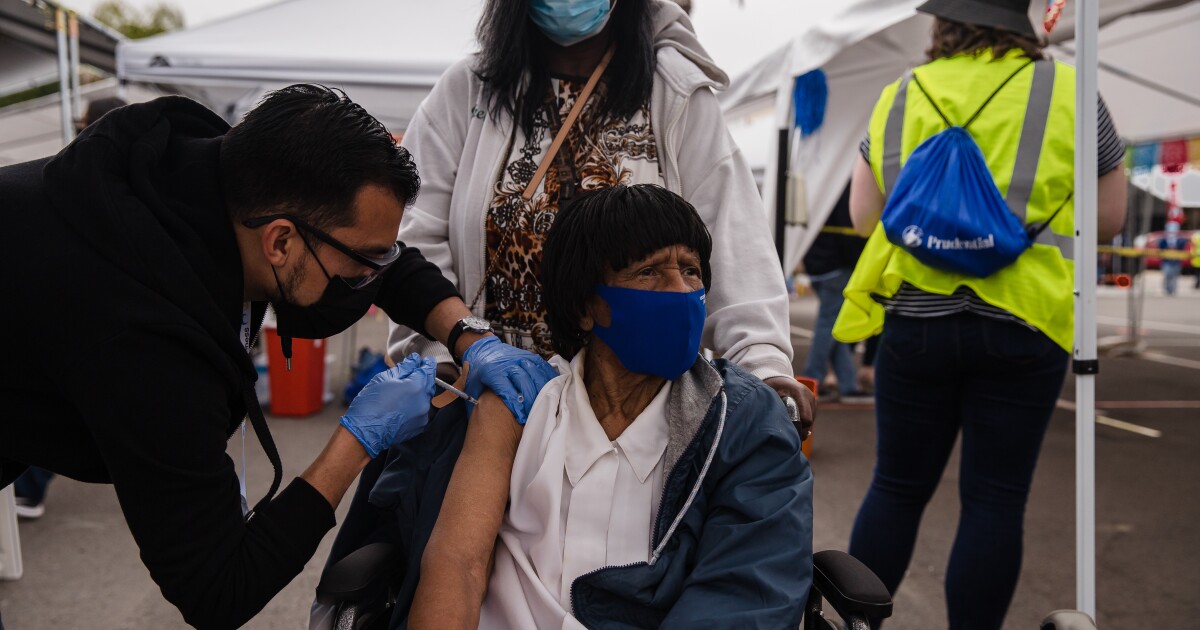 After months of overwhelming vaccine demand in San Diego County, some local health systems are turning down doses. Others are asking for less vaccine.

That would have seemed unthinkable a few months ago, when San Diegans scoured the Internet for appointments, spent hours locked in bumper-to-bumper traffic and lined up late into the evening outside immunization sites — all in the name of getting a COVID-19 vaccine.

But that was then. This is now. The balance of vaccine supply and demand has shifted drastically. The county, health systems and smaller providers now must figure out the best way to get shots into the arms of San Diegans who are more ambivalent — and, in some cases, more hesitant — than those who’ve already been inoculated.

“There definitely are a lot of people who still need vaccines. You can tell from the county numbers that we’re not there yet,” said Dr. Marlene Millen, who has helped lead UC San Diego’s vaccine effort. “But we have to start looking for those people. They’re not coming out like the first group did. We’re in what we call the ‘hand-to-hand combat’ phase of vaccination.”

Millen says UC San Diego continues to inoculate plenty of people who need their second dose of the Pfizer or Moderna vaccines. But the number of unvaccinated people getting their first shot has declined dramatically, she adds, dropping as low as a few hundred a day at UCSD-run sites.

The situation isn’t much different among other health systems. A spokesperson for Sharp HealthCare, which runs vaccine superstations in San Marcos, Chula Vista and La Mesa, said that Sharp has declined extra doses from the county beyond its usual vaccine allocation. And a representative for Scripps Health, which operates a superstation in Del Mar, said the system has asked to receive fewer doses from the state.

Major health systems aren’t the only ones seeing a slowdown. Dr. Suzanne Afflalo, a former Kaiser Permanente primary care physician who is leading the charge to vaccinate southeastern San Diego, has seen the same trend. Back in February, Afflalo began organizing vaccine clinics at churches and community centers that mainly serve San Diegans of color. But events that once drew more than 1,000 people now sometimes bring in fewer than 100.

There are many reasons, she says, noting that some people probably opted to spend the weeks of Cinco de Mayo and Mother’s Day with family rather than get vaccinated. But demand is clearly an issue, and she believes addressing vaccine hesitancy on a smaller scale will be key.

“We’ve had lots of webinars and town halls and things like that,” Afflalo said. “But everyone’s an individual, and they all have their own individual concerns as to what is holding them back.”

Sharp, Scripps and UCSD say that vaccine hasn’t been thrown away because of reduced demand. It’s unclear, however, whether there’s been a rise in dose wastage locally or across the state. The San Diego Union-Tribune reached out to the county and the California Department of Public Health but did not receive responses on deadline.

The slowdown comes at a time when county officials still hope to fully vaccinate 2 million San Diegans against the coronavirus. They’re a little more than 60 percent of the way there, with 1.26 million residents fully immunized from a single dose of the Johnson & Johnson vaccine or two shots of the Moderna or Pfizer vaccines, according to the local vaccine dashboard.

Paradoxically, vaccinating more people can make it harder to persuade others, says On Amir, a behavioral scientist at UC San Diego’s Rady School of Management. That’s because the unvaccinated are already beginning to benefit from the spread of the virus slowing due to those who’ve gotten their shot. And it’s inherently difficult to convince people that the benefits of vaccination far outweigh the risks — even a year into a pandemic that has killed about 587,000 people in the U.S.

“People are notoriously bad at assessing risks,” Amir said. “People who never go to the ocean are afraid of sharks, (yet) more people die of champagne cork openings every year than sharks.”

But many of the unvaccinated are younger and healthier than the general population. And vaccine providers are grappling with how to persuade them.

“I don’t think the messaging has shifted the way it needs to,” said UCSD’s Millen.

She adds that she’s seen younger people finally decide to get vaccinated after seeing a social media post about someone their age having a bad bout of COVID-19 — not because of a doctor recommendation.

Millen says UCSD’s mobile vaccination group is brainstorming new ways to make getting vaccinated easy, accessible and fun for young adults. One idea that she’s pitched to the team: Set up pop-up clinics at local breweries willing to offer a free drink to those who’ve been immunized.

It’s an approach that’s been tried in New Orleans. Other parts of the U.S. are offering doughnuts and even considering $100 savings bonds as an incentive in a bid to get as many shots as possible to as many people as possible.

County officials are already shifting their tactics, too. Several county-run sites now open into the evening, and many locations no longer require appointments. On Friday, the county announced a new program in which companies, nonprofits, religious groups and other organization can host vaccine clinics and have county staff show up to run the event.

While coronavirus numbers in San Diego County remain relatively low, public health officials stress that vaccination is the best way to make sure these figures drop further and stay down. On Monday, the county reported 233 new coronavirus infections out of 5,406 viral tests. That’s a 4 percent positive rate, a slight uptick at a time when daily percent positivity usually ranges between 1 percent and 2 percent. But it’s too early to tell if that is a one-day blip or a harbinger of a future trend.

The county reported no additional COVID-19 deaths on Monday. There are 155 San Diegans in the hospital from a coronavirus infection, in line with recent trends.

Am I eligible for the vaccine?

Anyone 16 and up is eligible.

Where can I get my shot?

The region has mass vaccination sites in La Mesa, La Jolla, Chula Vista, San Marcos and Del Mar. There are also many smaller sites throughout San Diego County, some run by Sharp HealthCare and Rady Children’s Hospital. The county’s COVID-19 vaccine page lists the various locations and ways to sign up; we have a similar resource on the U-T’s website. Local pharmacies are an option, too. CVS is now offering walk-in (appointment-free) vaccination as well as same-day appointments. If you have a Facebook account, you may want to join the San Diego Vaccine Hunters group, where more than 6,000 people ask and answer questions about how to book an appointment.

If you want to make an appointment at one of the smaller county-run sites, you can do so through an online system called MyTurn (myturn.ca.gov). Several of these sites are now also accepting walk-ins.

County officials have said that seniors who don’t have a computer can call 2-1-1 for help scheduling vaccination appointments. There’s also a group called San Diego Vaccine Angels, which is helping seniors and those who aren’t tech savvy book appointments.

Health care providers such as UC San Diego Health, the San Diego VA, Sharp and Scripps have been reaching out to older patients within their systems to schedule appointments, but that is happening slowly and unevenly between providers depending on how much vaccine they have.

K-12 teachers and staff won’t have to schedule their own vaccine appointments, as that will be handled through a program run by the San Diego County Office of Education and California Schools Voluntary Employees Benefits Association (VEBA), an organization that offers health care benefits to school employees. Scripps Health will work with law enforcement agencies to ensure that officer are immunized and San Diego firefighters will go out into the fields to vaccinate farm workers.

Can I pick which vaccine I get?

Sort of. Some of the the county’s vaccine locations only offer the Moderna vaccine. Others offer the Pfizer vaccine, such as the Del Mar Fairgrounds superstation.

But both of those vaccines use the same approach to spark immunity against the coronavirus and are about 95 percent effective at preventing you from getting sick with COVID-19.

Speaking of which, you’ll need to come back for a booster shot three or four weeks later for Pfizer’s and Moderna’s vaccines, respectively. That second dose maximizes immunity against the virus. When you get your first shot, you’ll receive a vaccination record card reminding you to return for that next appointment.

The most recently authorized vaccine, made by Johnson & Johnson, only requires one shot.

How much does the shot cost?

The shot is free — though, of course, the U.S. government used taxpayer dollars to purchase the doses. Vaccine providers can bill your insurance an administration fee, but there’s no copay. And if you don’t have insurance, you’ll still get the vaccine at no cost.

What can I do after getting vaccinated?

The CDC says it’s also OK for fully vaccinated people to gather with unvaccinated people who live together, as long as those people are at low risk of developing severe COVID-19. And the agency has said that fully vaccinated people can travel within the U.S. without getting a coronavirus test before or after their trip or needing to quarantine after their travels. Those who travel internationally won’t need a negative coronavirus test unless it’s required by the nation they’re traveling to, but will still need a negative test result before boarding a flight back to the U.S. and must get another test within three to five days of returning from their trip.

Caution is still key. The CDC says to avoid medium- or large-sized gatherings regardless of vaccination status, and to wear a mask during large outdoor gatherings. Part of the issue is that you don’t have to have COVID-19 symptoms to spread the coronavirus, and many people still haven’t been vaccinated yet. Researchers say that throwing caution to the wind could further fuel the spread of the virus and even lead to new strains that vaccines don’t work against — undermining the whole immunization campaign.

Remembering a radio station that began in San Pedro nearly 100 years ago, and is still going