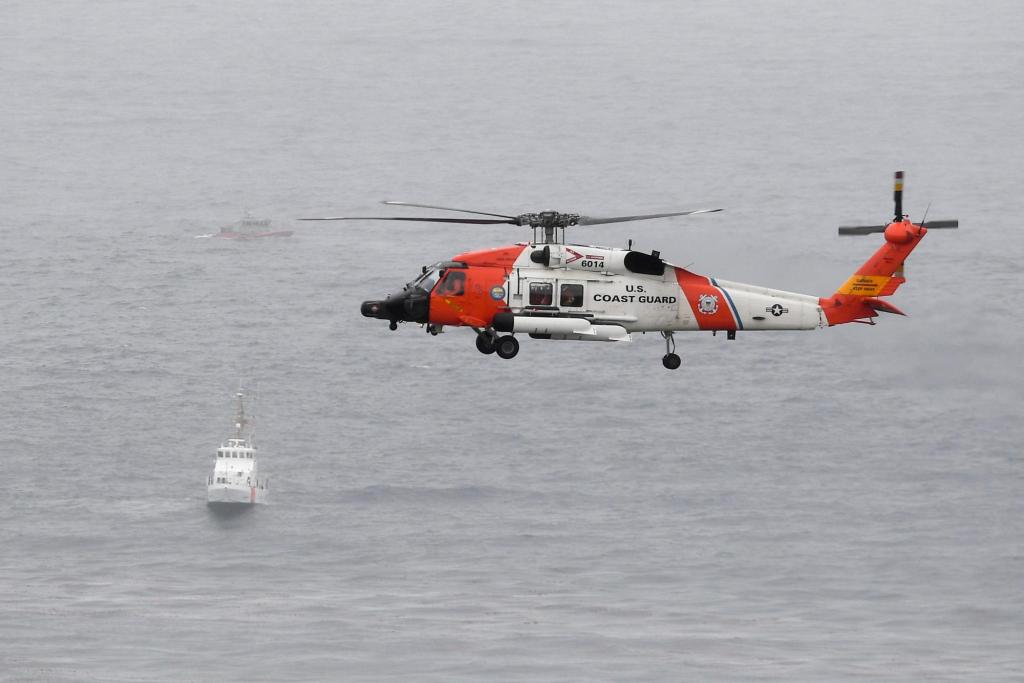 SAN DIEGO (AP) — A tractor-trailer slams into an SUV at an intersection on a remote California desert highway, killing 13 of 25 people crammed inside the late model Ford Expedition.

A man dangles a toddler over a border wall near Santa Teresa, New Mexico, allowing her to fall on her face before he disappears into Mexico.

A 40-foot (12.2-meter) cabin cruiser overloaded with 32 people capsizes just off the San Diego coast, killing three and critically injuring another person. The others aboard survived, with one in critical condition.

The incidents, which occurred over the last two months, show how smugglers put migrants at extraordinary peril for profits, whether by car, on foot or at sea.

The Coast Guard on Monday ended its search for survivors of the San Diego boat wreck, which happened on a bright Sunday morning near tidepools of Cabrillo National Monument, a popular spot for tourists and hikers.

Mexico’s Foreign Relations Secretary said Mexican passengers were being turned over to U.S. immigration authorities to be returned to Mexico.

The boat captain was in custody but Kelly Thornton, a spokeswoman for the U.S. attorney’s office in San Diego, declined to comment, saying prosecutors were “carefully reviewing the matter.”

The SUV crash occurred in March and authorities said it was one of two vehicles crammed with occupants that entered the U.S. through an opening cut into the border wall. All were being smuggled. Those inside the other SUV were not involved in the accident and were picked up by the Border Patrol.

The toddler in the New Mexico incident was believed dropped into the country by a smuggler and survived the fall.

Smuggling off the California coast has ebbed and flowed over the years but has long been a risky alternative for migrants to avoid heavily guarded land borders. Small boats with single- or twin-engines known as “pangas” enter from Mexico in the dead of night, sometimes charting hundreds of miles north. Recreational boats, like the one that capsized Sunday, try to mix in unnoticed with fishing and pleasure vessels during the day.

Later Sunday, U.S. authorities stopped an unaccompanied 13-year-old boy, seven men and one woman suspected of entering the country illegally at sea after getting off a recreational boat in Newport Beach, about 100 miles (162 kilometers) north of the border.

The Border Patrol tallied 1,273 smuggling arrests on the California coast during the 12 months that ended Sept. 30, a 92% increase from the same period a year earlier. Since Oct. 1, it has made more than 900 arrests.

Boats are known to launch in Mexico from Playas de Rosarito, a city that borders Tijuana and is popular with American expatriates. It’s about 20 miles (32 kilometers) south of San Diego.

There are many secluded, private beaches with gated entrances between high-rises with magnificent ocean views, some only partially built because funds dried up during construction. Popotla, a fishing hamlet where narrow streets are lined with vendors selling a wide variety of local catch, is favored among smugglers for its large, sandy beach and relatively gentle waves.

In October, a 42-year-old Mexican man was sentenced to nearly seven years in federal prison for his role as captain of a panga boat with six migrants aboard, two of whom died after the engine stalled in rough waters off the coast of Imperial Beach, California. The pilot, who had a handheld GPS device, told investigators he was paid $5,000 to guide the boat, which launched in Ensenada, a port city south of Playas de Rosarito.

The same pilot was convicted of smuggling for leading a vessel to Seal Beach Naval Weapons Station near Los Angeles, in January 2019. Police found 14 people hiding amid brush and buildings in Huntington Beach.

On Friday, the Border Patrol alerted the public and boaters to increased surveillance in San Diego over the weekend, one day after intercepting a panga-type vessel off the San Diego coast. All 21 people aboard — 15 Mexican men and six Mexican women — were taken into custody and two were likely to be charged with smuggling crimes.

The pilot in Sunday’s wreck was likely trying to blend in with pleasure craft, said Mike Unzueta, who witnessed an increase in marijuana smuggling from Mexico at sea when he led U.S. Immigration and Customs and Enforcement’s Homeland Security Investigations unit in San Diego in the late 2000s, then a shift to people and finally to hard narcotics.

“It’s a tragic story and it’s a sad, sad story but it just underscores the risks that desperate people are willing to take,” he said.

The original call was for a handful of people overboard, said San Diego Lifeguard Services Lt. Rick Romero, who was among the first on scene. There were life preservers on board, but it wasn’t known how many or whether any passengers were wearing them.

“There are people in the water, drowning, getting sucked out the rip current there,” Romero said.

The passengers got lucky that a Navy sailor was in the area with his family and jumped in to assist. Cale Foy, an active duty rescue swimmer, told KGTV-TV in San Diego that he and a Navy SEAL trainee who was also there instantly knew what to do.

Under pandemic-related public health orders in effect since March 2020. Mexicans and people from Guatemala, Honduras and El Salvador who are in the country illegally are immediately expelled to Mexico without an opportunity to seek asylum.

President Joe Biden exempted unaccompanied children from expulsions but the vast majority of adults are still quickly removed from the country without facing legal consequences, prompting many to try again until they succeed.

Alexander: A castoff comes back to burn LAFC

Why married couples should be a tax-cutting team