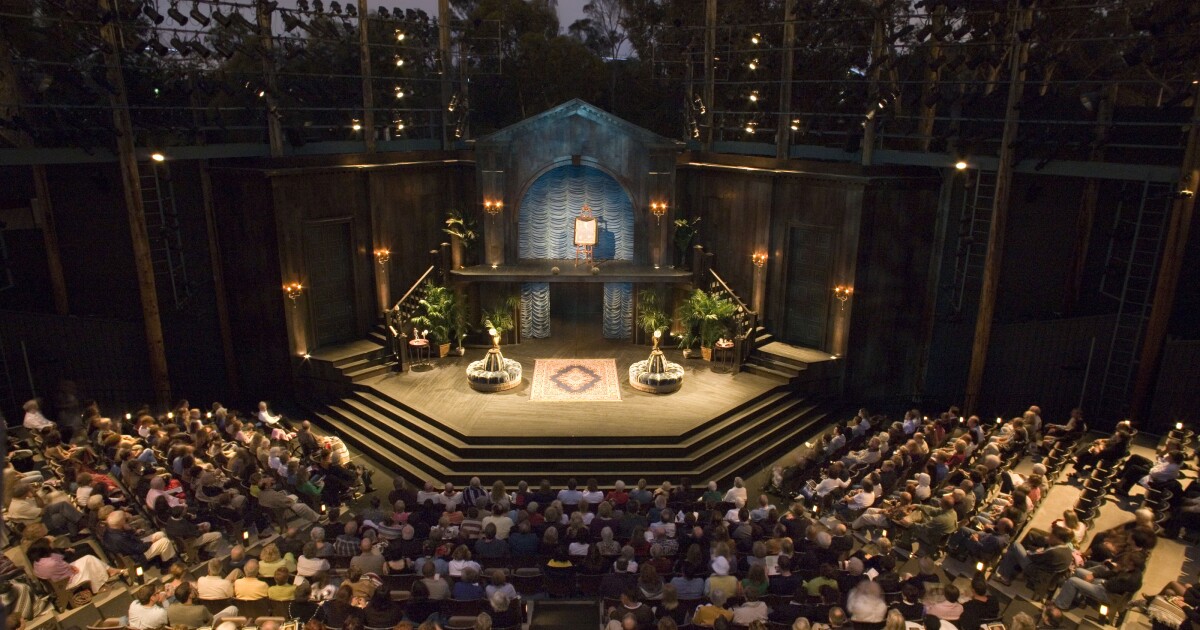 San Diego officials are taking a comprehensive look at how city arts funding is doled out, with the goal of finding gaps in who gets the money, possible inequities and potentially troubling trends that need attention.

Balboa Park and downtown get nearly 70 percent ofthe $11.4 million the city annually contributes to arts and culture organizations, according to the report.

Nearly all cities funnel significant resources to large venues such as the San Diego Civic Theatre and Balboa Park’s institutions because they are intended to serve an entire region. But some question whether San Diego may be devoting too much money to those areas.

The study also shows stark differences in arts funding that some say may indicate low-income neighborhoods are getting shortchanged because of bias in the city’s process of rewarding grants. Also, leaders of arts groups in poor areas often aren’t briefed on how to apply or don’t trust the process.

The issue goes beyond bias toward downtown and Balboa Park, with areas getting the next-highest levels of arts funding being wealthy neighborhoods along the coast.

“It’s the complete opposite of fair,” he said. “Inequality absolutely exhausts hopes, and it comes across in incredibly overt ways with this report.”

Others say San Diego needs to ensure that the definition of what qualifies as arts and culture isn’t biased against immigrants and other groups.

The city’s analysis shows nearly 69 percent of arts money in fiscal 2020, or $7.84 million, went to City Council District 3, which includes downtown, Balboa Park, Old Town, Hillcrest and some nearby areas.

The two districts with some of the lowest household incomes also received dramatically less arts funding. 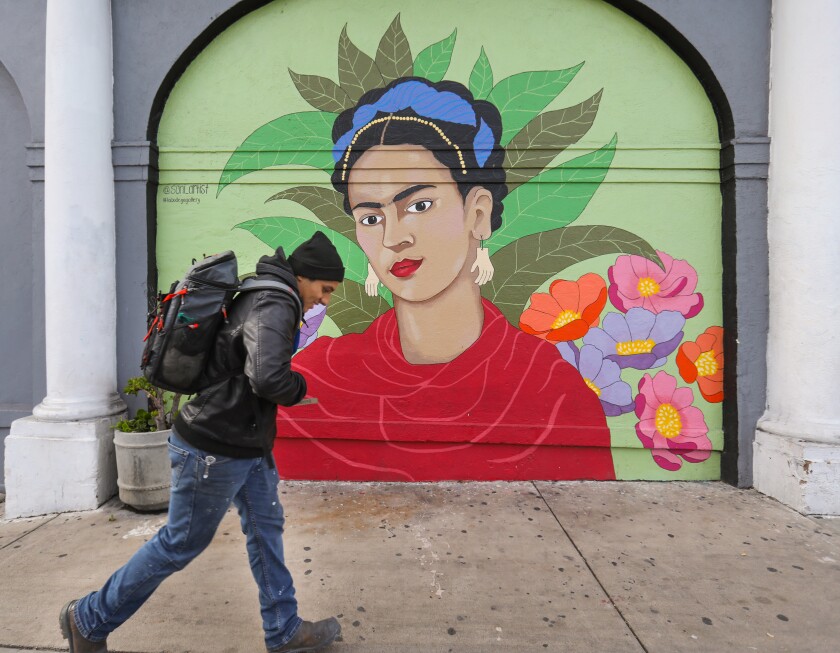 A pedestrian walked past La Bodega Gallery which closed in 2019, the result of gentrification and higher rents in the neighborhood, according to local artist Carolyn Osorio who had exhibited her work at the gallery.

Martin said the map and report raise questions about how underfunding cultural resources impacts communities and may dissuade people from applying for funding.

He said it’s important for community members to be part of the funding process to advocate for more equity and hold those in power accountable.

“If no one is going to advocate for us and the other communities who are at the short end of the stick year after year, it ain’t never gonna change,” he said.

While Districts 4 and 8 have far fewer arts venues, programs and events, the disparities have prompted city officials to step up outreach efforts to arts organizations in low-income areas, said Jonathan Glus, executive director of the city’s Commission for Arts and Culture.

“We’re very committed at the staff level and the commission level,” said Glus, noting that 15 organizations applied for grants in 2020 that hadn’t applied in 2019. “They hadn’t applied before because they didn’t feel like they kind of fit into the rigorous system, the panel review process.”

“The consequences of trust and feelings of lack of access we just have to work around,” he said, vowing to ask each councilmember annually for suggested groups to fund in their district. “I look forward to you holding us accountable.”

A seminar she attended provided information on what the city is looking for in grant applications and how to handle the paperwork, she said, adding that the seminar should have been posted online or scheduled on a weekend so more people could attend.

Without that help, the application process can be confusing and intimidating, she said.

“It’s hard to know what they are asking for and to become comfortable,” she said.

Elo-Rivera said it’s particularly important to make sure the city considers giving grants to programs and events that might not be traditionally seen as art.

Glus said such concerns have prompted city officials to seek feedback from residents and community leaders about what should define arts and culture locally.

“Right now, there isn’t a definition the community has given us — how they identify or experience or perceive arts and culture,” Glus said. “We are working to expand the definition to the best of our possibilities, but at the end of the day the community really needs to tell us.” 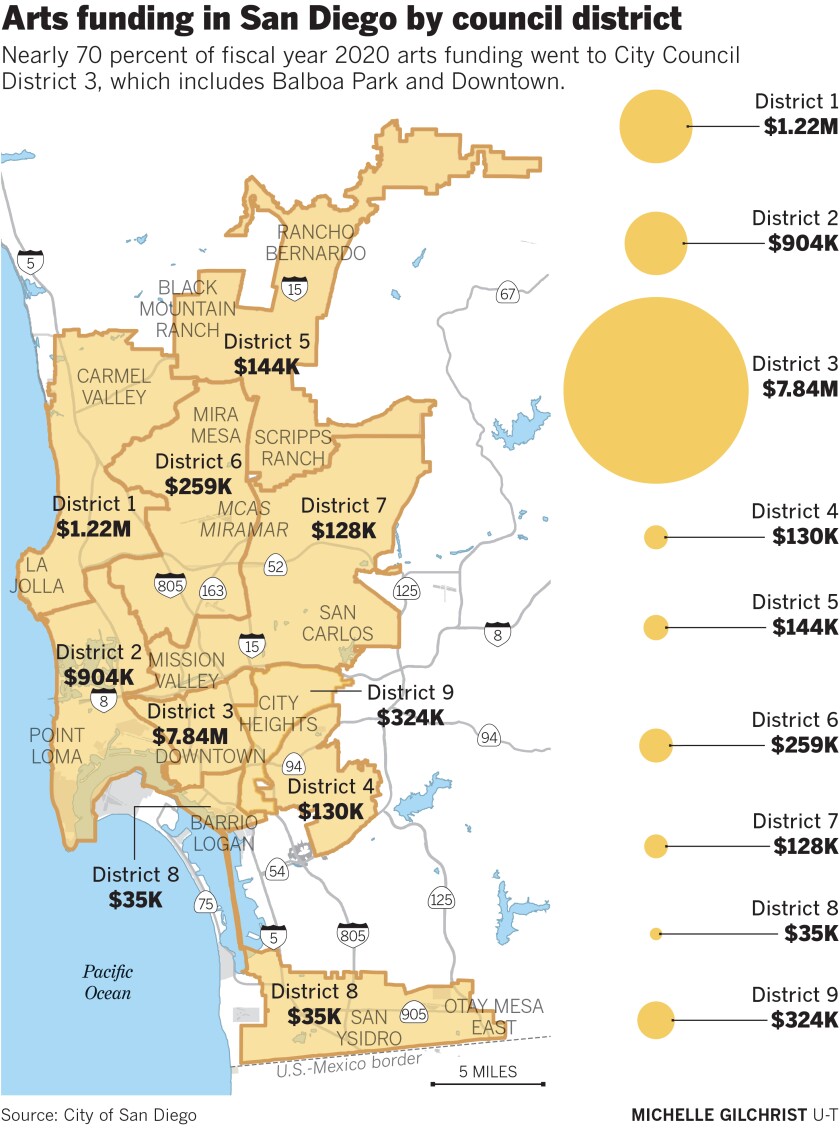 The funding disparities go beyond District 3 getting more than 200 times as much annual arts funding as District 8.

Districts 1 and 2 — which are wealthier and less ethnically diverse than most other parts of the city — also received far more than every place else except District 3. 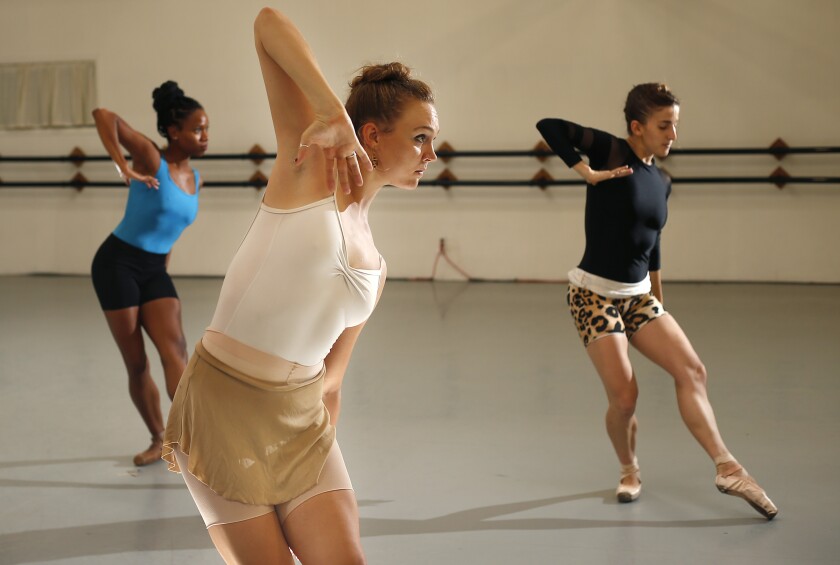 Dancers from City Ballet, including Lauren Anthony, left, Bethany Green and Carly Topazio rehearsed for The Rosin Box Project, a dancer-produced performance in 2019 at The White Box Live Arts at Liberty Station.

The city also bases funding partly on other donations an organization receives, to ensure city money goes to groups with strong community support, a track record and credibility.

“My experience is the city’s formula and process is pretty fair, but it’s possible it could be made better,” Fox said. “I think there’s a legitimate argument they need to handle smaller organizations differently than larger organizations.”

“It’s incredibly impactful data,” she said. “We’re getting a much better understanding of organizations and the amount of cultural vibrancy they are providing across the city. How people use this information is going to create a lot of new, exciting possibilities for San Diego’s future.”

The city has created an online interactive map to show which programs and events got funding in fiscal 2020. It can be found at sandiego.gov/arts-culture

What Does the Released Footage Around OC Sheriff Deputy Killing of Kurt Reinhold Show?

Joe Manchin says there is ‘no circumstance’ in which he would back weakening the filibuster.