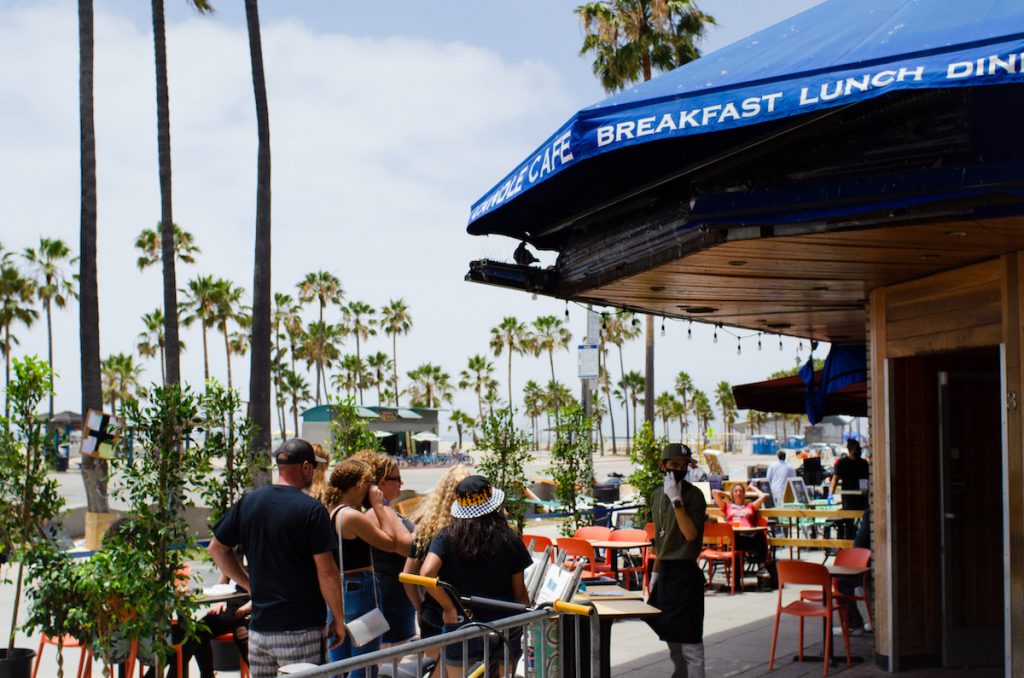 Patio seating is more popular than ever at restaurants that reopened when governments relaxed precautions against the spread of COVID-19, one feature of the during- and post-pandemic world. Senior hours at some grocery and big box stores are no longer strictly enforced, with sprinklings of youngsters now appearing among the silver-haired.

Beaches are crowded, and the supposedly required social distancing there fast became another non-enforced rule. Masks remain almost ubiquitous on the sand and will be at least for many months, but the question of wearing them or not remains political dynamite.

Most white-collar workers sent home to work at kitchen tables or in their bedrooms are still there, many companies saying they can work from home as long as they like. Traffic on California freeways is far lighter than B.P. (before pandemic), but up from levels at the height of the lockdown.

Gyms, allowed to reopen in most counties in early June, may be where change is most obvious. Some rules there have also been among the silliest.

While reservations have been commonplace for centuries at fine restaurants, and even at some that are not so fine, they are new to gyms, but now required by some locations in the large 24 Hour Fitness chain.

Gyms are getting cleaned more often and more thoroughly than most have been since they were built. Weight machines are wiped with germicides at regular intervals. It’s forbidden to stay in some gyms longer than an hour. Basketball and handball courts in many facilities are now homes for treadmills, elliptical machines and other workout staples. In some gyms, these are about 10 feet apart; others create spacing by allowing members to use only one of every two or three machines.

One seemingly absurd policy governed at many gyms until Gov. Gavin Newsom ended it on June 18 with a wide-ranging order for masking: Users for awhile had to be masked when entering and walking around, but not while exercising, when most persons breathe hardest and spew the most potential contagions.

Many gym rats wonder why these facilities were ever shuttered, as their changes could have been made very quickly. Meanwhile, academic studies show that in all age groups, people who exercise have stronger immune responses and resist disease better than comparable folks who don’t.

Said one 78-year-old regular at a 24 Hour Fitness in Los Angeles, “I never understood why they closed the gyms. This place is why I’ve lived so long.” He substituted home weight-lifting and long walks for gym activity, but says it never had the same benefits.

Gyms are also symbolic of the lockdown’s economic toll. The iconic Gold’s Gym chain filed for Chapter 11 bankruptcy in early May. 24 Hour Fitness, in expansion mode B.P., soon followed, firing many employees on impersonal phone calls. 24 Hour also eliminated dozens of gyms across California, reopening only the most profitable.

Amid this turmoil, many longtime gym users remain hesitant to return. Many have doubts about ventilation systems, as federal health officials warn that recirculated air can carry contaminated spit and sweat globules too small to see or feel. Others, like Gold’s Gym devotee and ex-Gov. Arnold Schwarzenegger, said they wouldn’t return unless masks were required at all times.

They should be now.

In business, group video calls on services like Facebook, Zoom and Google Meet were relatively rare B.P., but swiftly became lifelines for stay-at-home workers. These sessions remain common even as lockdowns fade away. They’re also vital tools for grandparents and their grandkids, whose personal contacts are hindered as many grandparents continue self-quarantining even while life reopens for others.

While some psychotherapists decry the lack of personal contact in virtual meetings, others say the new services opened their practices beyond previous geographic limits. “Now I’m seeing patients in other states, even other countries,” said one San Francisco psychologist. “It’s true I can’t see their body language as well as I’d like, but the talk therapy is very useful. It’s much better than nothing, what we feared when the lockdown started.”

All of which makes this already a changed world, with more shifts to come. Some will be improvements, some not. The only certainty: Life will never go back to the old normal.

Email Thomas Elias at [email protected] His book, “The Burzynski Breakthrough: The Most Promising Cancer Treatment and the Government’s Campaign to Squelch It,” is now available in a soft cover fourth edition. For more Elias columns, visit www.californiafocus.net