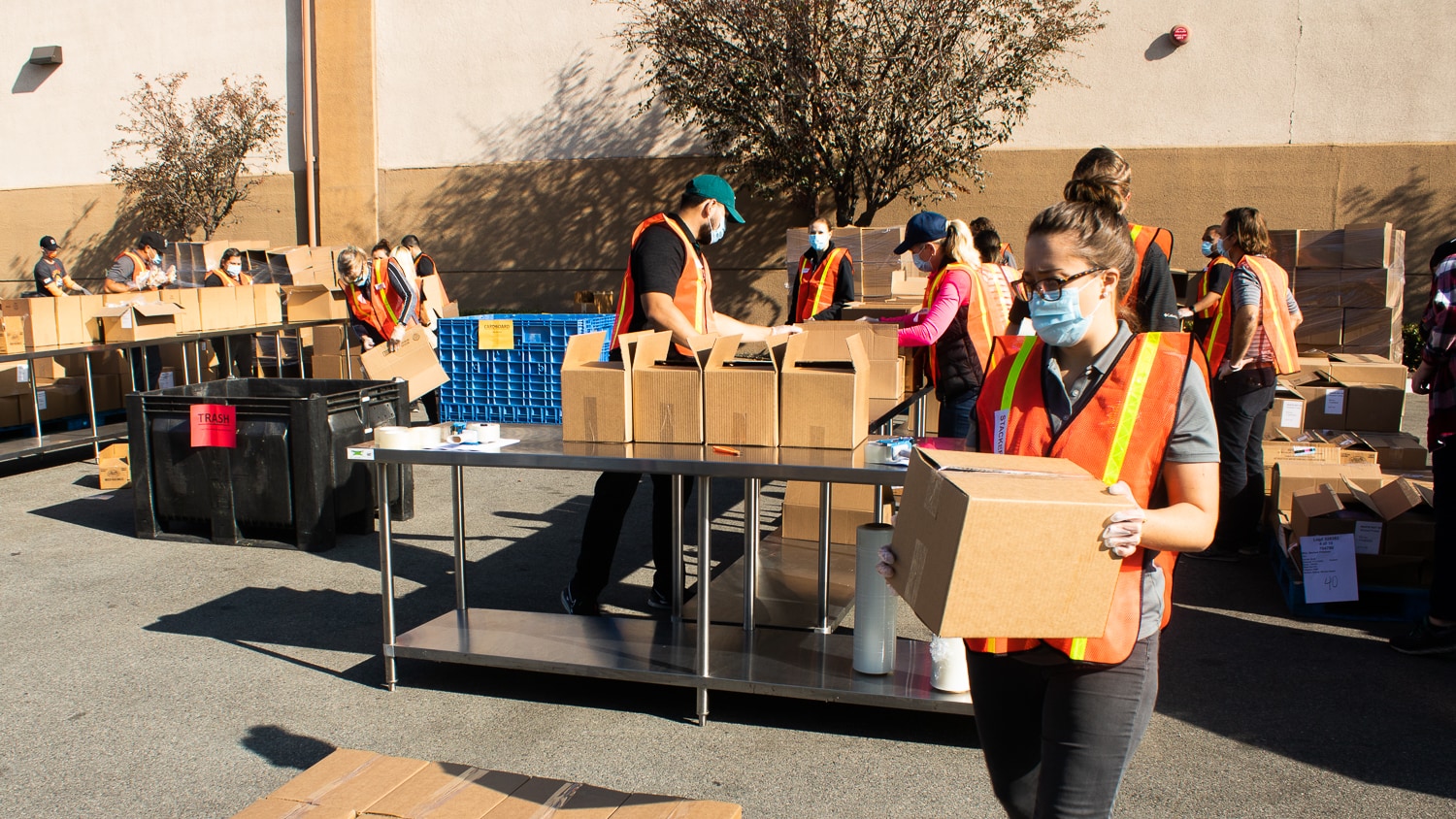 When the pandemic took hold of life in Orange County in March, most people were ordered to stay home.

But local houses of worship, food banks, pantries and their team of volunteers didn’t.

Instead they stepped it up, feeding residents across Orange County as waves of people faced food insecurity after losing their income when businesses shut down.

Utilizing drive-through distributions, they’ve been able to pass out food week after week abiding by safety measures in place to avoid the spread of the virus.

Those efforts have been made possible by volunteers who joined them on the ground, risking infection to provide peace of mind for people unsure where their next meal might come from.

Some of the volunteers themselves were the same people who lost jobs during the pandemic.

“When I look at it from the volunteers point of view, some of them have been furloughed, some of them during the quarantine were locked up and a lot of them as I speak to them … just wanted to be able to find some way to give back,” said Andre Roberson, the president and executive director of the Power of One Foundation told the Voice of OC.

The United Across Borders Foundation has also been holding distributions in the County with the help of volunteers including three turkey giveaways this past weekend.

“Without the volunteers, there’s no way that this can happen,” said Olivia Casillas, the Vice President of Operations for the foundation.

The Voice of OC has reached out to volunteers from various organizations to share their experiences. Here are their stories:

Anna Bautista has been volunteering with The Power of One Foundation during the pandemic. The foundation provides her with boxes of food which distributes through her own nonprofit.

Anna Bautista, a Garden Grove resident, has been volunteering with the Power of One Foundation during the pandemic almost every day helping one way or another at their warehouse and at their distributions.

Bautista said when some people come to their distributions they even ask for a box of food for their neighbors.

“I like what Power of One is doing,” Bautista said. “They’re uniting the community because now people are thinking about their neighbor, their community and that is really beautiful.”

Bautista is also a beneficiary of Power of One which gives her boxes of food that she distributes at a church in Westminster through her own nonprofit “Hidalguenses En California – Club El Apapacho.” She also receives boxes of food for her family.

Anna Bautista hands out boxes of food at a church in Westminster on Nov. 13, 2020.

“I never did community service in my life before so for me this is really humanitarian because I’ve been on the side of people who lost their jobs and didn’t have anything to eat,” Bautista said.

Bautista said she knows what it’s like to be hungry.

“In 2010 I had to choose between buying food or putting gas in her car to continue working. I met someone at work who would share their lunch so I could fill up her car,” Bautista said.

Muhib John Aziz, a Garden Grove Resident, and his family volunteer with ICNA Relief to help those in need. Aziz said they got involved in volunteering after attending a diaper distribution held by the Muslim non-profit to pick up supplies for his little one.

“This is the best way for me to take my kids and be a part of it as well. Anytime in general, I can help humanity. I get a good feeling out of it and that’s what keeps me going forward,” Aziz said. “In this time of pandemic, everyone is in a severe need of help and I wanted to come out and show them my support.”

He added that as long as he and his family do their part to wear a mask and stay six feet apart from people there is no concern they’ll get the virus.

Muhib John Aziz, a Garden Grove Resident, and his family volunteer with ICNA Relief to help provide food and resources to people during the pandemic.

Aziz said it’s always important to make sure people get the food they need to feed them especially during times of disaster. For the volunteer, the purpose is not just about helping but to instill in his children the importance of giving back to the community.

“We are here to help humanity, especially those in need and to go out of our way to help our human brothers and sisters,” Aziz said.

Joanna Lee, Fullerton, is a graduate student pursuing a master’s degree in Divinity and has been attending Vineyard Anaheim Church for the last two years. The church holds multiple food distributions every week to feed anybody hungry where she volunteers.

Part of Lee’s responsibilities is leading the Church’s weekly Saturday distribution at Brookhurst Community Center as well as helping out with their Senior Grocery Delivery program.

Lee said that even though the church had to shut down because of the pandemic, their efforts to hold community pantries stood out to her on social media and that’s how she got involved.

“When COVID first hit, it was such a time of fear of uncertainty and we didn’t know what was going on,” Lee said “Every time I saw what Vineyard was doing through social media or whatnot, it felt like there was so much hope, and so much light and so I was just attracted and drawn to that.”

She added at first that she was not sure volunteering was a good idea given the fact that Lee lives near her parents who are both older than 65. She also said the Church and their volunteers are being careful and following safety precautions at their distributions.

“At the end of the day, I didn’t want my fear to stop me from doing what I could to contribute to the restoration of the community and reaching out to those who are more in need than I am,” Lee said “I have a home and I can quarantine at home but there are many who don’t have a place of rest and a place of peace.”

Business owner Gurmeet Sawhney helped make signs and banners for the Sikh Center of Orange County Food Pantry through his own graphics company.

Gurmeet Sawhney has lived in Orange County for the last 40 years and during the pandemic has been volunteering at food distributions held by the Sikh Center of Orange County in Santa Ana. Sawhney’s cousin Bandana Singh is the director of the Gurudwara’s food pantry.

Sawhney started helping in the beginning of March, before the pantry started, making signs and banners for it through the graphics company he owns called Aahs Signs and Graphics.

He said since the pandemic his business has been cut in half. Sawhney has been working for months from home where he lives with 11 people including his family, his brother’s family and their parents.

“We’re still so blessed. We’re still lucky,” he said. “There’s so many people who need it so this is the least we could do. This is nothing really. We all have to help each other. We all have to stand by each other so then there’s a lot less burden on one person if everyone’s doing it together.”

For Sawhney the best part of helping out is the diversity and the number of people who come out to volunteer.

“It’s awesome to see how many people are committed. Nobody’s being forced to do it. Nobody’s getting paid to do it. Most of the weeks, they have to turn off the volunteer list, because it fills up so quickly,” he said.

Jeanette Mayer, an Irvine resident, retired from a career of teaching four years ago since then she has been volunteering with Second Harvest Food Bank of Orange County.

Prior to the pandemic, she was helping sort through food donations, checking to see that the goods were not expired or damaged. When the pandemic hit, Mayer began to volunteer at the drive through distributions Second Harvest held at the Honda Center for 16 weeks and since has helped pack food boxes.

Jeanette Mayer, a retired teacher, has been helping out the Second Harvest Food Bank of OC and assisted the nonprofit pass out food when they were holding distributions at the Honda Center.

Mayer added her experience helping out at the distributions at the Honda center was amazing.

“You could feel overwhelmed with the need that so many people were facing. Mostly though, it felt really good to be part of a solution, or part of a way to help the community in a really dire time economically,” she said.

The Voice of OC would like to thank all the volunteers and organizations who have been on the ground feeding residents during the pandemic as well as the partnerships that make the food distributions possible.

Andre Roberson & the Power of One Foundation Team

These are just a few of the groups and people helping out at this time. Thank you to everyone else who is also helping feed the community.

Hosam Elattar is a Voice of OC Reporting Fellow. Contact him @[email protected] or on Twitter @ElattarHosam

Orange County Democratic party to candidates: Back police reform if you want us to back you