Nets, Magic kneel together for anthem as one player stands 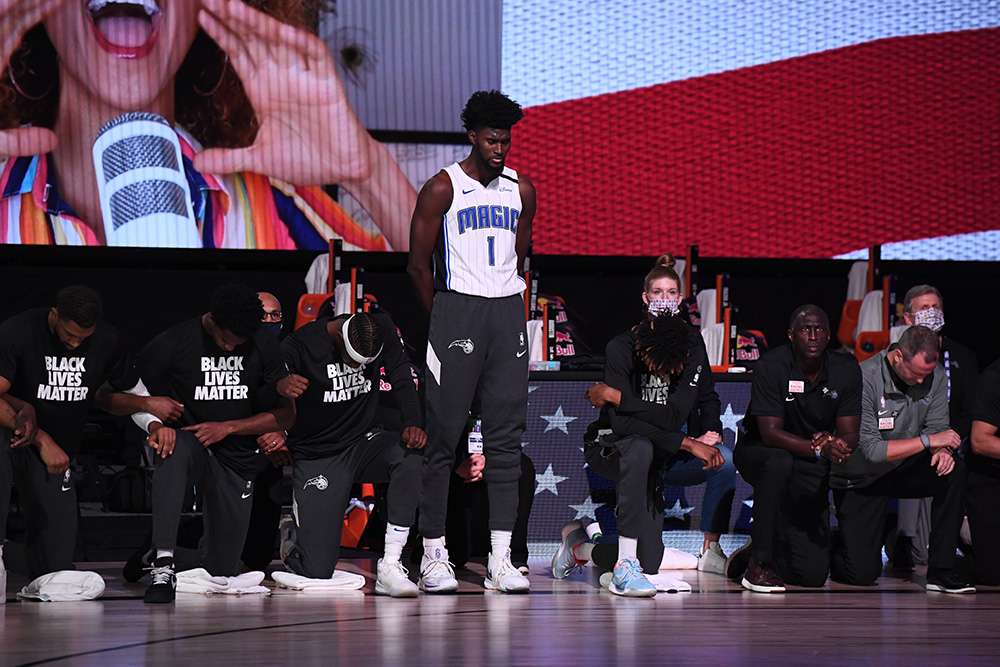 The Nets’ first game of the NBA restart in Disney was poor. But Jarrett Allen thought their social justice statement beforehand was perfect.

Before the anthem and tipoff at ESPN Wide World of Sports, the NBA played a video documenting the league’s commitment to fighting social injustice and racism. The Nets donned Black Lives Matter shirts, and both they and the Magic players knelt for the national anthem.

“This is a hell of a moment,” Allen said. “We have everybody, refs, coaches, our teammates, we all come from different backgrounds, but at the end of the day we all can see in each other that we’re all the same. We’re all humans, we all want equality, we all want peace.

The exception on either team was Magic forward Jonathan Isaac, who instead opted to stand and wear his Orlando jersey with his hands behind his back.

For his part, Isaac didn’t view kneeling and wearing the shirt as the answer.

Members of the Magic and Nets kneel during the national anthem.AP

“Black lives and all lives are supported through the gospel,” said Isaac, an ordained minister who said he was praying during the anthem rather than singing it.

“I just wanted to take that stance to say Jesus is the answer. I didn’t think me wearing [messaging] on the back of my jersey was the answer.”

The moment made the Nets’ Garrett Temple emotional.

Tennis legend on ‘Never Have I Ever’ gig: ‘Why the hell is John McEnroe doing this?’