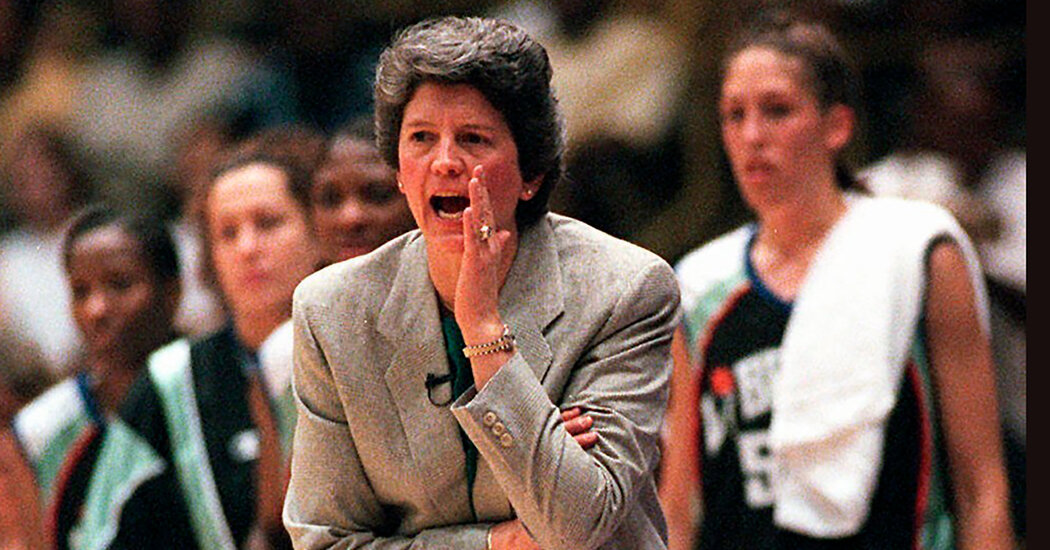 Darsch turned Ohio State into a powerhouse, helped two U.S. teams win Olympic gold and was one of the original coaches in the W.N.B.A., leading the New York Liberty.

Nancy Darsch with the New York Liberty in the first W.N.B.A. game, in 1997, against the Los Angeles Sparks in Inglewood, Calif. She had just come off a successful coaching run at Ohio State.Credit…Kevork Djansezian/Associated Press

Nancy Darsch, who helped turn Ohio State into a women’s basketball powerhouse and then joined the professional ranks, becoming the first coach of the New York Liberty and leading the team to the W.N.B.A.’s inaugural championship game, died on Nov. 2 at her home in her hometown, Plymouth, Mass. She was 68.

She had suffered from Parkinson’s disease, her sister-in-law, Mary Darsch, said.

Darsch had solid credentials when she joined Ohio State as the women’s head coach in 1985. She had been an assistant to the renowned Pat Summitt at the University of Tennessee — the first assistant women’s basketball coach at the university to be paid — and helped lead the Lady Vols to five Final Four appearances.

She was also an assistant coach for the United States teams that won gold medals in the 1984 Summer Olympics in Los Angeles and in the 1996 Games in Atlanta.

“We were committed to finding someone with a national reputation,” Ohio State’s athletic director, Rick Bay, told The Columbus Dispatch in June 1985. Darsch, he said, had coached “every great women’s basketball player in the country in the past five years.”

In her 12 years at Ohio State, her teams won four Big Ten titles, made seven N.C.A.A. tournament appearances and played in one championship game, in 1993, when the No. 3 Buckeyes lost to No. 5 Texas Tech, 84-82. It was the first time a Big Ten women’s team had made it to the N.C.A.A. championship.

Under Darsch, the Ohio State women had their first televised game, on ESPN in 1990. She brought in one of the first full-time strength coaches for a college women’s team as well as a sports psychologist, an emerging concept at the time.

In 1991-92, Ohio State recruited the top freshman class in the country, signing Katie Smith, who would be inducted into the Naismith Basketball Hall of Fame in Springfield, Mass., in 2018. In the 1993-94 season, the Buckeyes led the country in attendance for women’s collegiate basketball games.

Darsch was also host of “The Nancy Darsch Show” on local television, on which she talked basketball with guests. Having one’s own show was a rarity for female coaches at the time.

She accomplished another milestone in 1994, when she became the first coach of an Ohio State women’s team to receive a multiyear contract — a breakthrough at a time when most women’s coaches worked year to year.

Darsch, who was fired in 1997 following several lackluster seasons, amassed a 234-125 record, making her the second-winningest coach in Ohio State women’s basketball history, behind Jim Foster.

When the W.N.B.A. started up in 1997, Darsch, with nearly 20 years of top-tier college experience, signed on as head coach of the Liberty, a team anchored by the superstars Rebecca Lobo and Teresa Weatherspoon and owned by Madison Square Garden.

The night before the team’s first practice, Darsch, along with her assistant coach, athletic trainer and a volunteer equipment manager, sat with a black magic marker putting players’ numbers on white socks. The team barely had a practice court — they’d usually work out at a sports club — and no video system to make game tapes for studying.

But it was no matter: Darsch led the Liberty to win the first game played in the W.N.B.A, a 67-57 victory over the Los Angeles Sparks. She then took the team to the championship game that year in Houston before losing to the Houston Comets, 65-51.

After two seasons and a 35-23 record, Darsch was dismissed in September 1998 after the Liberty had failed to make the playoffs that year. The following February, she was named head coach of the Washington Mystics. But she resigned during her second season with the team after a poor start and amid reports of tension with Chamique Holdsclaw, one of the league’s top players.

“We were not meeting the goals I set for myself or the team,” Darsch said at the time. She later had stints as an assistant coach with the Minnesota Lynx and the Seattle Storm of the W.N.B.A. and at Boston College.

As a coach, her teams were well drilled, and she was respected for her technical knowledge of the game.

“Some people sit down and do two or three crossword puzzles a day, or jigsaw puzzles or video games,” Darsch told The Washington Post in 1999. Basketball was the equivalent for her, she said. “I like to watch it and see what people are running,” she said. “I like to try to understand from the outside what the other team is doing.”

Nancy Mary Darsch was born in Plymouth on Dec. 29, 1951. Her mother, Arline (Giovanetti) Darsch, was a maternity nurse. Her father, John Darsch, was an automobile mechanic.

Darsch in 2013. “Some people sit down and do two or three crossword puzzles a day, or jigsaw puzzles or video games,” she said. Basketball was the equivalent for her.Credit…Elaine Thompson/Associated Press

Darsch played on the girls’ basketball team at Plymouth-Carver High School and graduated from Springfield College in 1973 with a degree in physical education. She took a job teaching and coaching the girls’ field hockey, softball and basketball teams at Longmeadow High School in Longmeadow, Mass., outside Springfield. There, in the wake of the newly instituted Title IX federal legislation barring sex discrimination in education, she fought to improve conditions for the girls’ athletic program.

She received a master’s degree in physical education from the University of Tennessee in 1979.

Darsch remained a proud New Englander, finding pleasure in teaching people how to eat lobster and taking them whale watching. She told The Columbus Dispatch that if she hadn’t made basketball her life, “I’d want to own a bar on Cape Cod, like the one in ‘Cheers.’”

Dorsey, under fire from both parties, defends labeling tweets.

Doctors Are Calling It Quits Under Stress of the Pandemic

Tennis Tours Hope to Salvage Their Seasons. It’s Not Getting Easier.

As Money Squabbles Delay M.L.B., Many Workers ‘Just Get Steam-Rolled’