Midtown Is Reeling. Should Its Offices Become Apartments? 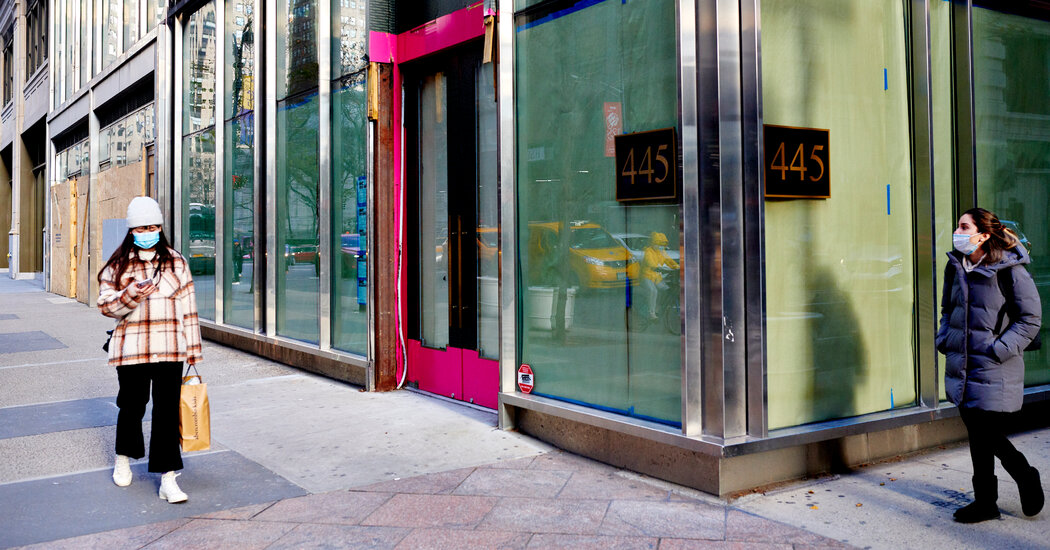 Nearly 14 percent of office space in Midtown Manhattan is vacant, the highest rate in 11 years.Credit…Gabby Jones for The New York Times

The pandemic is pummeling New York City’s commercial real estate industry, one of its main economic engines, threatening the future of the nation’s largest business districts as well as the city’s finances.

The damage caused by the emptying of office towers and the permanent closure of many stores is far more significant than many experts had predicted early in the crisis.

The powerful real estate industry is so concerned that the shifts in workplace culture caused by the outbreak will become long-lasting that it is promoting a striking proposal: to turn more than one million square feet of Manhattan office space into housing.

Nearly 14 percent of office space in Midtown Manhattan is vacant, the highest rate since 2009. On Madison Avenue in Midtown, one of the most affluent retail stretches in the country, more than a third of all storefronts are empty, double the rate from five years ago.

The collapse of commercial real estate is another major burden for New York, since the industry provides a significant portion of the city’s tax revenues.

Filings to erect new buildings in the city, a key indicator of industry confidence, have dropped 22 percent this year to 1,187, the lowest number since 2010.

As of late October, only 10 percent of Manhattan’s one million office workers were reporting to the office, according to a survey by the Partnership for New York City, an influential business group.

And this already bleak picture could even get worse, real estate experts and industry executives said.

“It would probably be fair to say we haven’t hit bottom yet,” said James Whelan, president of the Real Estate Board of New York.

It does not appear that the major commercial landlords in the city are facing financial collapse, but the stocks of the ones that are publicly traded are down sharply since March.

The fallout from the crisis can be seen in a rising tide of litigation between landlords and tenants, even at some of New York’s most gilded addresses.

At the Shops at Columbus Circle, a luxury mall overlooking Central Park, the developer has accused a group of high-end retailers, including Michael Kors and Hugo Boss, of skipping out on more than $7 million in rent and fees. On Fifth Avenue, the Italian designer Valentino has sued its landlord to free itself from a lease of nearly $1.6 million per month.

New York City’s finances — money to pick up trash, repair parks and police streets — rely heavily on the health of the industry.

Property taxes represent the largest source of city revenue, and commercial property accounts for the largest share of that overall levy, 41 percent, according to Thomas P. DiNapoli, the state comptroller.

Commercial property sales have plummeted by nearly 50 percent through October, according to Rahul Jain, a deputy state comptroller.

A weakened commercial real estate market will make it “much harder for businesses and the economy to get back to normal,” Mr. DiNapoli said.

The lack of workers is having a ripple effect on rents. Across Manhattan’s retail corridors, asking commercial rents have dropped nearly 13 percent from last year, according to CBRE, a commercial real estate firm. The steepest declines are in areas dominated by office buildings, including Times Square and Grand Central Terminal, and shopping destinations like SoHo.

Image Commercial real estate is a vital source of the city’s revenue, accounting for 41 percent of its property taxes. But many buildings are vacant.Credit…Simbarashe Cha for The New York Times

The industry’s troubles, initially sparked by the exodus of office workers during the state’s stay-at-home orders in the spring, have persisted as many commuters have settled into long-term or permanent remote-work arrangements. Tourists have also largely disappeared.

As a result, tensions are growing between the city’s powerful landlords and some of their equally powerful tenants. Property owners have accused blue-chip companies of using the pandemic to withhold rent they can afford, while tenants have portrayed landlords as greedy and unwilling to acknowledge economic reality.

The shop has been sued over more than $511,000 in unpaid rent and charges at four other Manhattan stores that were closed for months at a time.

“The amazing thing to us is that in New York, they’re going after rent for times when we weren’t allowed to be open,” Mr. Berger said. “We have worked out deals with our landlords across the country except in New York City.”

Landlords like Related, which owns the Shops at Columbus Circle and has sued five of its tenants there, say they have their own financial obligations and tenants that can afford rent should pay.

The litigation does not capture the behind-the-scenes, high-stakes negotiations that have led to resolutions without resorting to court, said William H. Mack, a commercial lawyer at the firm Davidoff Hutcher & Citron in New York.

Mr. Mack has been hired by Hugo Boss in its effort to reduce or void its lease at Columbus Circle. “This is 80 to 90 percent of what I’ve been doing since March and April,” he said.

At the Real Estate Board of New York, whose members include nearly every major landlord and developer in New York, the prospect of systemic changes in work habits looms large.

“Anyone that thinks the way that people used the workplace in the past isn’t going to change postpandemic is fooling themselves,” said Scott Rechler, chair of the Regional Plan Association and the chief executive of RXR Realty, which controls 26 million square feet of city office space.

Employers have discovered that productivity does not necessarily suffer in the absence of shared work space and that smaller office footprints and more lenient work-from-home policies might make lasting economic sense.

As a result, the landlord group is proposing that the city and state allow developers to more easily convert Manhattan and borough offices into residences.

The real estate group estimates that converting even just 10 percent of that office space to residential would create 14,000 apartments citywide, including as many as 10,000 in Manhattan — a significant amount in a city routinely short of enough housing, especially affordable homes.

Changes to zoning rules needed for any conversions would require that some portion of new housing be set aside as affordable, the board said.

Mark A. Willis, a senior policy fellow at New York University’s Furman Center for Real Estate and Urban Policy, said that before the pandemic, job growth was outpacing housing growth in the city, causing demand to far outstrip supply and exacerbating the city’s persistent housing shortage.

“Facilitating the reuse of buildings to adapt to changes in the economy is, to me, a very smart idea,” Mr. Willis said.

Some tenants are using the current downturn — and the resulting lower prices per square foot — to trade up for nicer office space, the board said. That is a boon for higher-end office landlords, but could bode ill for landlords of lower-rated buildings.

Converting office buildings to homes would not only provide a potential financial lifeline to landlords, but would also benefit retailers, the real estate board argues, because the presence of office users during the day and apartment dwellers at night would increase foot traffic.

There is no reason, they argue, for Midtown to retain its status as New York’s last predominantly office district, bustling during the day but quieter at night.

They cite the success of Lower Manhattan, which in recent decades has turned from an almost exclusively office district into a vibrant residential neighborhood.

The proposal would require changes to zoning and density rules that would have to be approved by the City Council and the State Legislature and embraced by the mayor and governor.

Gov. Andrew M. Cuomo’s office would say only that he would review the idea.

A spokesman for Mayor Bill de Blasio, who is term-limited and about to begin his last year in office, welcomed the housing proposal.

Still, converting office space to apartments is not easy. Landlords would still need to wait for buildings to empty, which can take years.

The landlord group says the city and state should help expedite conversions by lifting zoning restrictions that require manufacturing in areas like the garment district, changing density requirements that bar apartments and creating new tax breaks for landlords.

Whether city and state elected officials will green-light a measure that would help real estate developers when so many tenants are struggling is an open question.

Nor is it clear how many landlords would actually take advantage of the proposed changes.

Jeff Gural, who controls a large portfolio of aging buildings in Manhattan, said he would rather remain in his current line of work.

“We don’t have that much vacant space to begin with,” Mr. Gural said. “And I believe there will be a demand for the kind of space that we have.”

Another possible source for expanding housing would be to convert hotels, many of which have closed as the industry has been decimated by a plunge in tourism and business travel.

That idea is gaining traction among some developers and affordable housing advocates. One group that is trying to shape the 2021 mayoral debate, United for Housing, will argue in an upcoming report that the next mayor should prioritize converting hotels into permanent supportive and affordable housing.

As for the real estate board’s proposal, some housing advocates say the pandemic is an opportunity to come up with creative way to ease the city’s housing crisis.

“We need a comprehensive plan for how to bring on new housing resources, and the idea of converting office buildings to residential I think has a lot of upsides,” said Brenda Rosen, the president and chief executive of Breaking Ground, which describes itself as the state’s largest provider of supportive housing.

In Remote Areas With No Internet, High-Speed Connections Come from Safe Beams of Light

Review: Why The Undoing Didn’t Do it for the Binge Generation