L.A. Unified will not reopen campuses for start of school year amid coronavirus spike 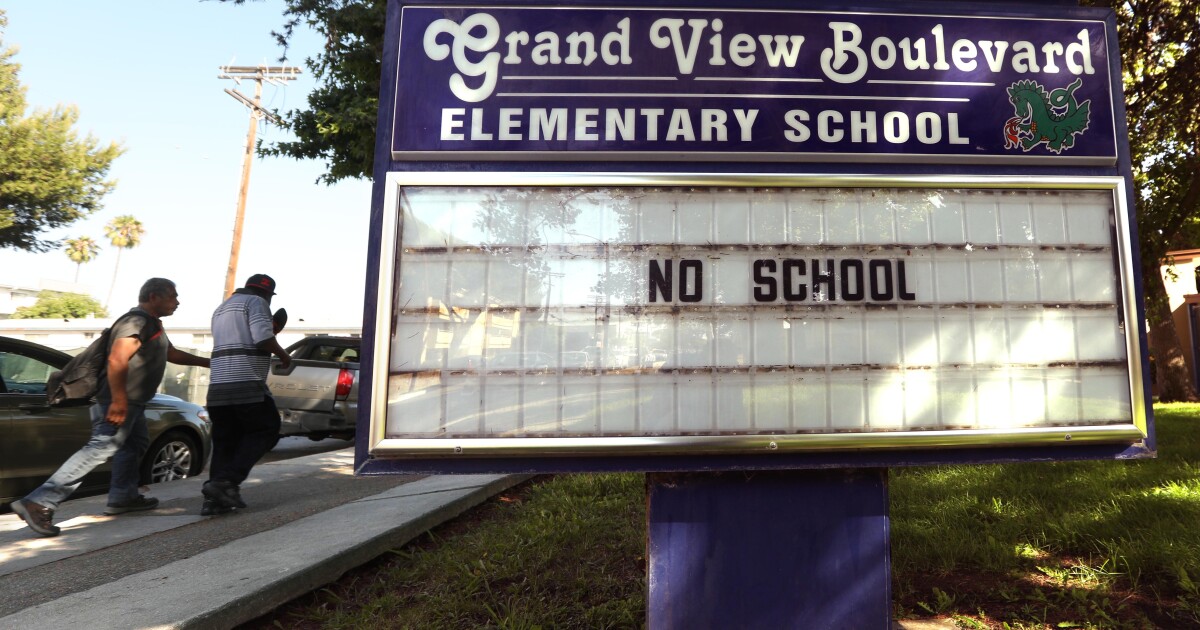 Los Angeles campuses will not reopen for classes on Aug. 18, and the nation’s second-largest school system will continue with online learning until further notice, because of the worsening coronavirus surge, Supt. Austin Beutner announced Monday.

The difficult decision became unavoidable in recent weeks, Beutner said, as coronavirus cases have skyrocketed in Los Angeles County, and the district cannot come close to protecting the health and safety of some half a million K-12 students and about 75,000 employees.

“Let me be crystal clear,” Beutner said in an interview with The Times. “We all know the best place for students to learn is in a school setting.” But, he said, “We’re going in the wrong direction. And as much as we want to be back at schools and have students back at schools — can’t do it until it’s safe and appropriate.” 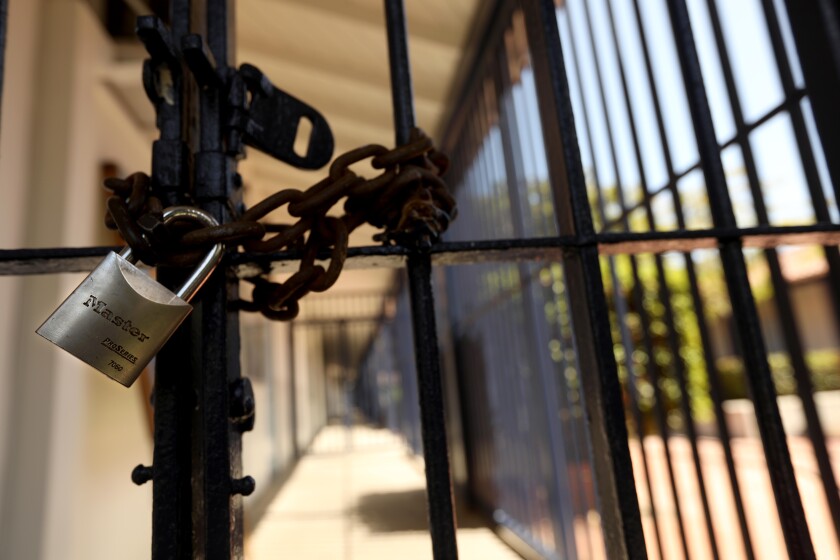 A padlock keeps the campus of Short Avenue Elementary School shuttered on Monday in Mar Vista.

He added that it was important to let families and district employees know so that they could prepare for the rapidly approaching start of the school year, only five weeks away.

The superintendent also pointedly called for county, state and federal officials to provide leadership and funding for regular coronavirus testing and contact tracing. He said that school districts also needed clearer guidance on when and how to reopen. Beutner estimated it would cost $300 a year per person to test all students and staff members once a week.

“The dollars pale in comparison to the importance schools will play in reopening what was the fifth-largest economy in the world,” he said.

The decision pitted two imperatives against each other: the need to reduce health risks versus the need to return students to classrooms — where, experts say, they will learn more effectively, while also allowing their parents to resume a more routine work schedule, helping to boost a state economy in deep recession.

Other school systems in disparate regions throughout the country are confronting the issue in different ways — in part because the health situation varies or because of political and philosophical divides over what should take priority.

In Fairfax County, Virginia, the school system is giving parents the choice of online only or returning to campus two days a week combined with online instruction.

In California, day by day, more school systems are choosing to keep campuses closed and reopen online only as health officials sound the alarm about the rising number of coronavirus cases.

In Northern California, those districts include West Contra Costa County, East Side Union in San Jose and the Oakland Unified School District.

In Southern California, the San Bernardino City Unified School District cited the “recent and significant rise in COVID cases in our community” in its July 2 announcement that campuses would not reopen next month.

“After the beginning of the school year and if and only when we can do so safely, we will begin to offer, in-person check-in and support services for small groups of students and eventually transition to a hybrid or blended learning model,” interim Supt. Harold Vollkommer said in a statement.

In L.A. County, recorded infections were reaching new daily highs and the infection rate of those tested rose to 10%. It had fallen to 4.6% in May.

“You wake up each morning and say, well, maybe that was a one-day thing,” Beutner said. “Maybe that was a one-week thing. Well, it’s been a month now. … We’ve been deliberating this for some time, since really the middle of June, since the health factors in the community started going in the wrong direction, in a hurry.”

In their planning for the fall, school district officials all over the region understood that some parents are not ready to send children back to campus: A distance-learning-only program is necessary for them.

Still, the recent hope had been that Los Angeles Unified and other school systems could open for most families using a hybrid plan, in which students would attend classes part time on campus in small socially distanced groups, using a staggered schedule. They were going to combine this limited on-campus time with an enhanced study-at-home framework that included academic work online and offline.

Some school districts still have been planning to go that route, but San Diego Unified, which was one of them, announced Monday morning that it, too, would be online-only for the start of the semester. In that school system, the teachers union had pushed back in recent days against reopening plans, dissatisfied with safety measures.

The teachers union in L.A. was more adamant. Last week, the leadership called for campuses to remain closed. And 83% of teachers agreed in a one-day snap poll; about 56% of union members participated in that survey.

But even a staggered, limited on-campus schedule would fall short of demands from President Trump and Education Secretary Betsy DeVos. They have threatened to withhold federal funds from school districts that don’t open campuses — although it isn’t clear that Trump would be able to carry out that threat.

Those siding with Trump include Florida Republican Gov. Ron DeSantis, who also has threatened the funding of school districts that don’t reopen campuses — despite a huge rise in that state’s infections and infection rates. About 90% of school funding comes from state or local sources.

Proponents of school reopening have pointed to apparently successful efforts in Taiwan, Norway and Denmark. Critics, however, have cataloged notable differences between the management and status of the pandemic in those countries and in the U.S.

By the start of school, Los Angeles Unified will have had about five months to improve what it can accomplish online: Students have computers and much-improved internet access and tech support. Teachers have received training for online education.

And certain familiar rituals will be restored: Teachers will take attendance and are expected to track student learning every school day; students will receive grades.

But uneven — often inadequate — study environments at home will persist. Some parents are less able or unable to monitor student schoolwork at home. Experts have warned that the students most likely to fall behind would include those in low-income families, students learning English and students with disabilities.

And child care could remain a quagmire. Beutner said calling it a crisis would be an “understatement.”

Children, he said, “are looking at a lifetime of consequences if we can’t get them back in a school setting as soon as possible, but it’s gotta be safe. And what we can’t do is turn our schools into some giant petri dish and have irreparable health and life consequences for all of the school community.”

Beutner said he was particularly struck by a study in Italy that appeared to document the spread of coronavirus infection from people who had not yet exhibited symptoms or who never had noticeable symptoms.

The school district, he said, was prepared to take the lead on prepping campuses for social distancing and the distribution of masks, but it could not carry the necessary burden for regular coronavirus testing and contact tracing.

Last week, L.A. County Public Health Director Barbara Ferrer warned school districts that they needed to be ready to move 100% online for the start of the school year, but did not issue a directive.

“We are a passenger on the bus, just like everybody else,” Beutner said. “If the spread is getting worse, if the rate of infection is getting worse, we can watch, we can monitor, but we can’t bend that. All we can do is keep it from getting worse by contributing to it.”