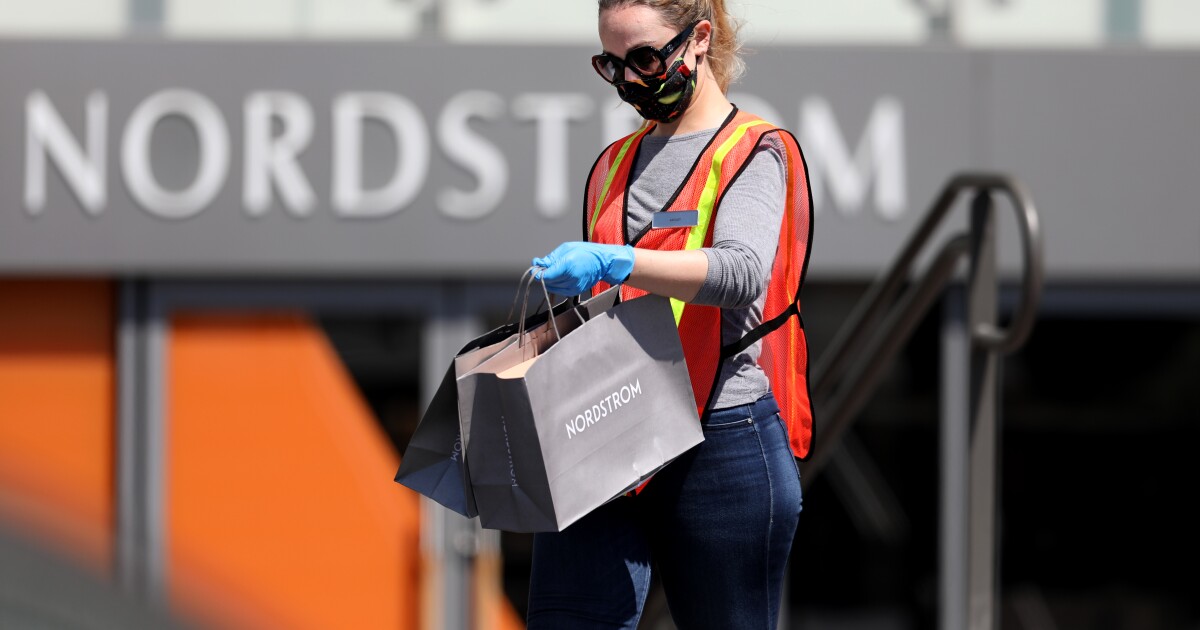 At the Original Farmers Market in Los Angeles, Kip’s Toyland reopened with only one worker per shift as coronavirus stay-at-home orders finally eased a bit.

The store was not allowing anyone inside Saturday, but that didn’t stop customers from trying.

“We have had a surprising amount of people that have actually come up to the door even though we’ve been trying to do mainly phone orders,” employee Eli Margolis said, “so I’ve been doing this kind of crazy thing of having to run around the whole store and show them something they might like.”

Businesses around the Los Angeles area this weekend began to figure out what the new normal looked like. Curbside pickup was allowed, but social-distancing rules required that the public not enter many stores that did not provide essential services such as food and medicine.

Here is a snapshot of what it looked like this weekend.

At Kip’s Toyland, it was a beginning.

“It was kind of difficult. But that’s on me to kind of figure out and make suggestions.”

Margolis said there had been four customers at the retro toy shop by early Saturday afternoon. He sold some puzzles, a hobbyhorse and the Sorry! board game.

“For the most part, I think it’s still kind of this weird stagnant period right now, especially with everyone still trying to refigure out — especially stores like us trying to redo our whole game plan and figure out how to kind of function in this new world,” he said. “It’s strange for sure.”

Flowers by Eugene in La Puente was permitting customers to come inside Saturday but requiring them to wear masks. A manager there also described the attempt at moving toward normalcy as surreal.

“It’s still kind of weird,” said the manager, Liz, who declined to give her last name. “I feel like it’s slowly getting better because we do have people coming in and calling.”

The store has been physically open since last week, but had been taking online and phone orders before that.

While customers were slowly returning, the florist was facing a different hurdle.

“The problem is, we’re limited in our flower supply because of what’s going on,” Liz said. “Flowers, it’s pretty scarce out there right now. The few people that have flowers out there now are asking for a lot.”

At Golden Apple Comics on Melrose Avenue, the doors are still closed to customers, but people are picking up orders in the back parking lot. Owner Ryan Liebowitz said his shop hadn’t received a shipment of new comics since March due to shutdowns in printing, distribution and shipping, but he expects new comics to start arriving next week.

“Comic book stores live and die every week by their shipment,” Liebowitz said.

Until curbside pickup was recently allowed, Liebowitz said, Golden Apple was relying on customers who subscribed to titles through the store and on online sales, with expanded online events intended to connect with customers.

“Our online sales are through the roof,” he said. “We’re waiting on Phase 3, where we can let people inside the shop. That hasn’t happened yet.”

Now Serving is a small independent bookstore in Chinatown that specializes in cookbooks and culinary books. Ken Concepcion, who owns it with his wife, Michelle Mungcal, said customers hadn’t been inside the shop since March, and he has pivoted to online sales and is working to showcase his inventory on his website.

“I still think we don’t know enough about the virus to where we can make definitive choices,” Concepcion said. He said they had a toddler, and an employee lives with an elderly relative.

“It seems irresponsible if we were just to let anybody come in,” he said.

Customers place orders online, then swing by to pick them up, with the store now serving as a kind of warehouse.

“We’ll place their goods on a table outside our door,” Concepcion said. “There’s a lot of waving, but there’s not a lot of other interaction.”

“It doesn’t feel normal,” said Donna Tabut, assistant manager of Book Alley in Pasadena. “We’re primarily a used-books store. A lot of customers, they like to look at the book.”

Browsing is a key part of the store’s business model, she said.

“Someone will come in, they can’t find the book that they were looking for, and they’ll come up to the register with 10 books that they weren’t expecting to find.”

Still, the store was taking orders through its website, as well as by phone and email. Customers were also able to walk up and look at the display window.

“As long as you’re six feet away from the store wearing a facial covering, we’ll try to assist you in whatever way we can,” Tabut said. “But we can’t allow anyone into the store at this moment.”

Devastated Santa Monica starts to rebuild with help from volunteers and donations: YO! Venice Show – June, 4, 2020