Is It Time to Stop Clapping for Health Care Workers? An Organizer Thinks So 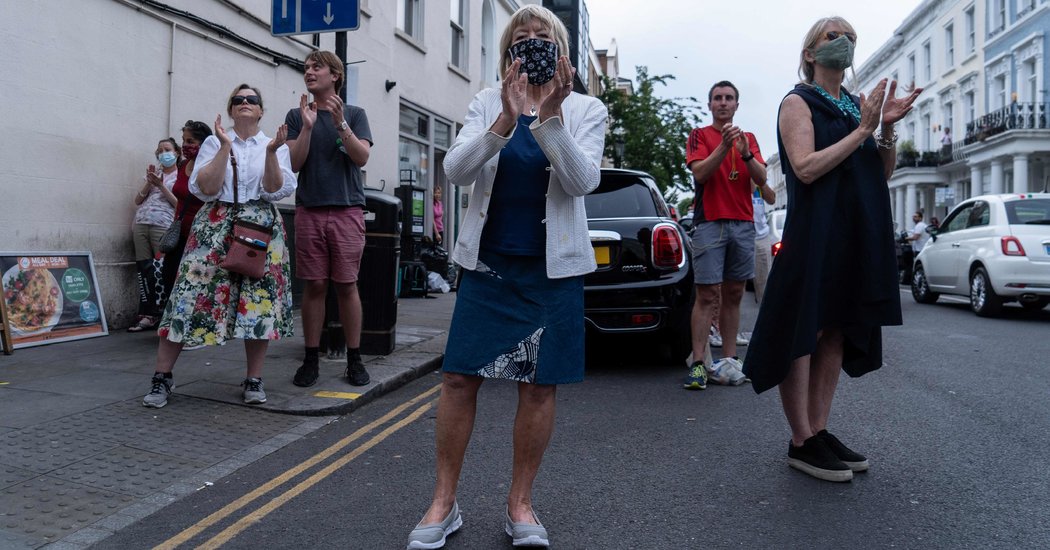 “To maintain the positive impact that it’s had so far, it’s best to stop at its peak,” said Annemarie Plas, who started #ClapForOurCarers.

On Thursday nights, Britons bang pots and pans and let out hearty cheers of support for doctors and nurses who care for coronavirus patients and for other essential workers amid the pandemic.

But the organizer behind the weekly ritual says it’s time for it to end, pointing to concerns that the act of recognizing the workers had become politicized.

Annemarie Plas, who started #ClapForOurCarers, said in an interview with the BBC on Friday that next week’s national applause, the 10th, should be the last. The future of the nightly clapping in cities like New York, where it began in late March and continues to go strong in some neighborhoods, remains unclear.

“I think that would be beautiful to be the end of the series, to maybe then stop and move to an annual moment,” Ms. Plas said. “I feel like this had its moment and then we can, after that, continue to something else.”

Ms. Plas said that she believed the ritual was “slowly shifting” and that other opinions had “started to rise to the surface,” referring to some criticism the movement has received. An opinion article in The Independent questioned the point of applauding if health care workers were underpaid. And some National Health Service workers have said they felt “stabbed in the back” by people who ignore public health guidelines.

While Britons have shown their appreciation for health care workers, Ms. Plas said, it’s now time for people in power to “reward and give them the respect they deserve.”

“I think to maintain the positive impact that it’s had so far, it’s best to stop at its peak,” she told the BBC.

Ms. Plas did not immediately respond to a request for comment on Saturday.

Image British hospital workers this month came out for a “Clap for Carers” recognition. In New York City, the ritual takes place every evening at 7.Credit…Justin Tallis/Agence France-Presse — Getty Images

Clapping for essential workers isn’t unique to Britain. Similar daily or weekly events have taken place in Italy, Spain and across the United States.

Candi Obrentz, an entrepreneur who lives in Midtown Manhattan, regularly shares clips of the nightly applause from her neighborhood on Twitter.

“If I’m home, I kind of hang out the window, and if I’m on the street, I stop wherever I am to participate,” Ms. Obrentz said on Saturday.

She said she understood Ms. Plas’s point of view but disagreed.

“I feel like just the gesture in itself is so important for our psyche,” she said, adding that the very act helped bring people together.

“Even if a health care worker isn’t hearing the clapping because they are at work and not hearing it, I do think it reminds the reveler, the clapper, that this is real and it’s still happening,” she said. “There’s no reason why we can’t, for two minutes every night, connect with each other.”

Dr. Robert Glatter, an emergency physician at Lenox Hill Hospital in Manhattan, said he thought that the applause should continue and that it had united communities with health care workers.

“We’re here to do our jobs always,” Dr. Glatter said. “We don’t need the clapping. We’re here to take care of our patients, but it’s certainly a very positive feeling.”

Dr. Armando Castro, the chairman of surgery at Long Island Jewish Forest Hills, a hospital in Queens, said that the first time he experienced the clapping it nearly brought him to tears but that the practice should come to a close.

“It does have to come to its natural end,” Dr. Castro said. “And when that happens, it’s not going to mean that we are not appreciated and the work that we do and continue to do as health care workers is taken for granted in any way.”