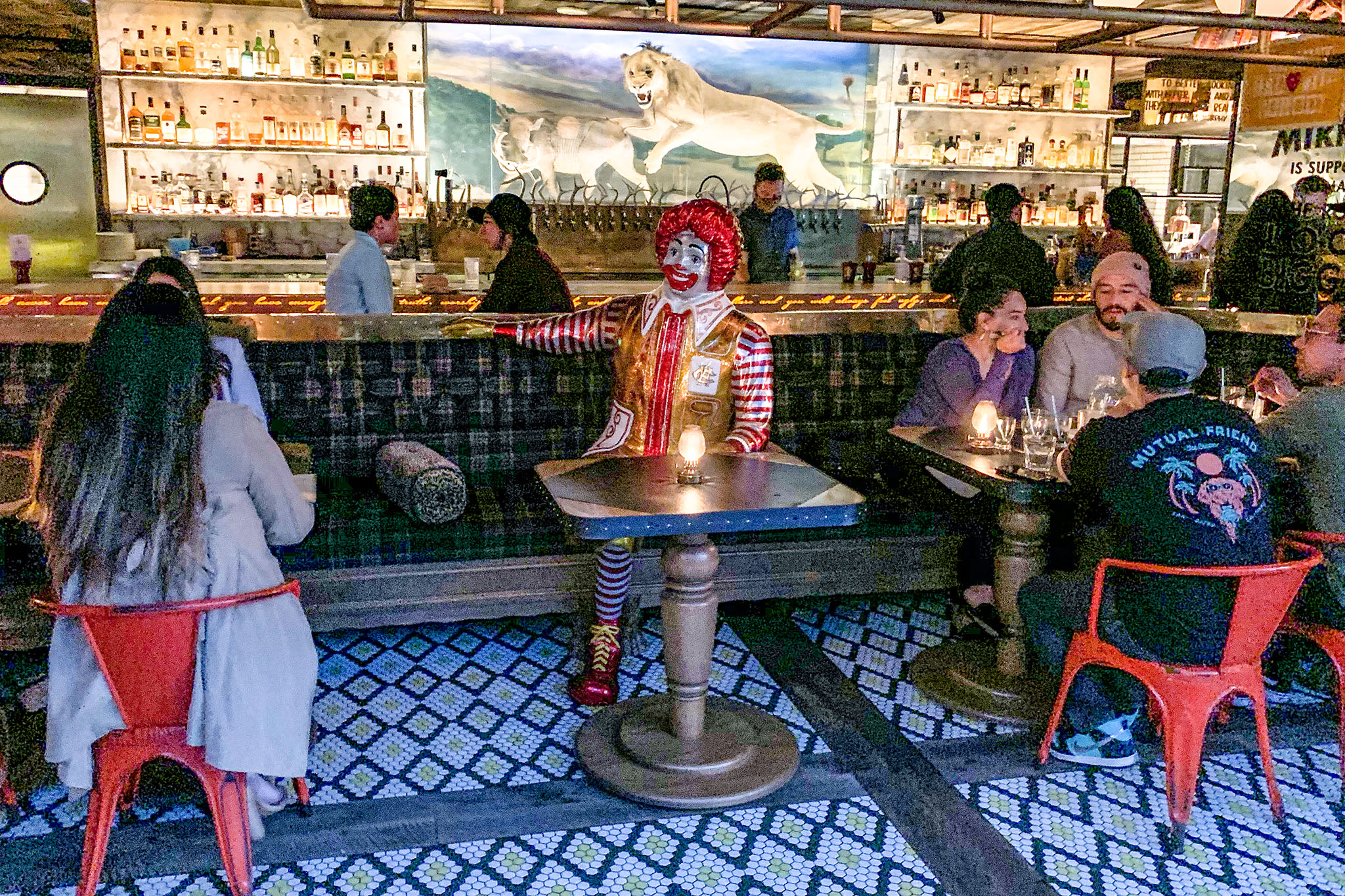 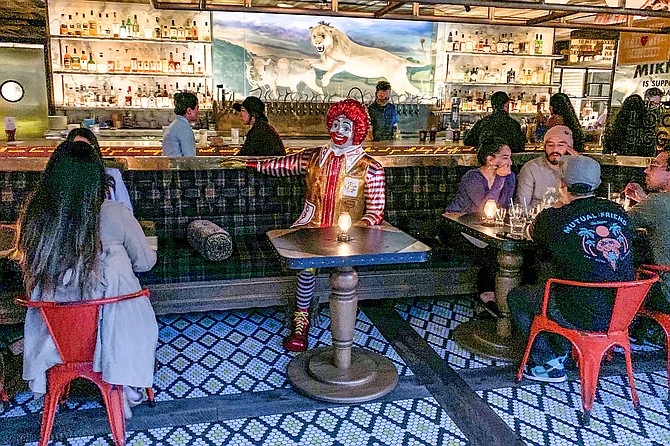 There’s something familiar about the creepy clown sitting at the middle table, like I’ve seen him before. I’m pretty sure last I saw him, he was giving off his too shiny, too smiley vibe to customers at the East Village space shared by the J & Tony’s negroni bar and Modern Times coffee shop, where the Consortium Holdings restaurant group has its offices.

Consortium shut down its properties with the pandemic, and has been selectively re-opening them in recent weeks, with occasional quirks and sharing of resources. For example, Morning Glory won’t open till early July, but I hear you can get its famous Japanese soufflé pancake at the Modern Times shop in the meantime. 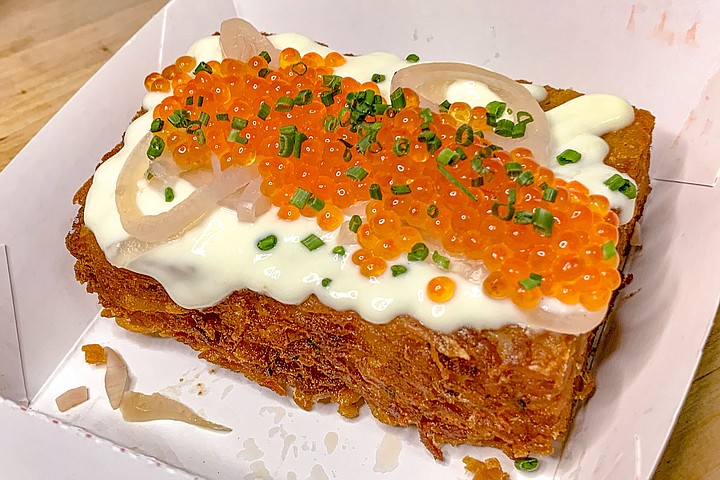 Where I guess you’ll no longer find that satirically creepy Ronald McDonald statue. At the moment, he’s been reassigned to the re-opening of another Consortium property, Craft & Commerce. The cocktail hub and eatery returned the last weekend of June, with the faux-Ronald serving as quirky reminder that social distancing rules are still in place, and masked bartenders and waitstaff a reminder that facial coverings are a must.

The presence of the fast food clown reflects another pandemic change as Craft & Commerce returns. In keeping with the half-dine-in, half-take-out theme we’re seeing in many restaurants, Craft has selectively revamped its menu, embracing a fast food theme. 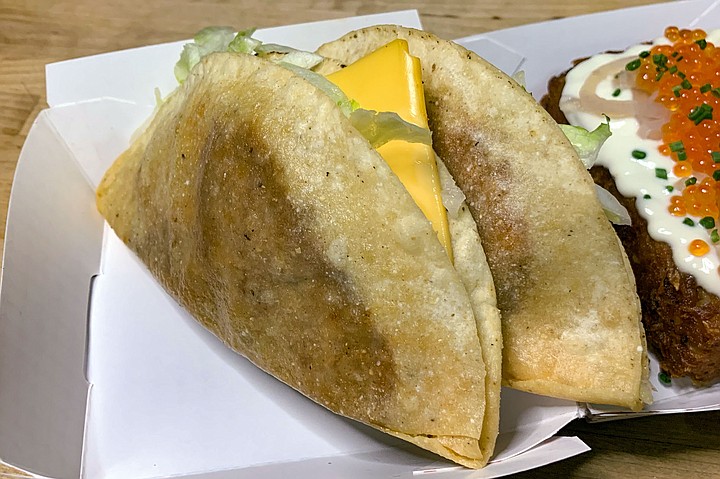 A pair of “Jack in the Crack” tacos, familiar to fast food buffs for their sliced of American cheese.

The idea is to reinterpret fast food favorites, but make them with quality ingredients, and maybe a bit of cheffy flourish. It’s not entirely fast food derivative (there is still a bone marrow appetizer, bacony brussels sprouts, and chopped salad), but classic drive-thru orders definitely dominate. Probably my favorite reimagining is the McDonalds hash brown: the real thing gives you a mildly greasy, crispy patty for a little over a buck. Here, the Mc C&C Hash Browns are served blini style, a thick potato cake dressed with crème fraîche, pickled shallots, and smoked trout roe, for $9. 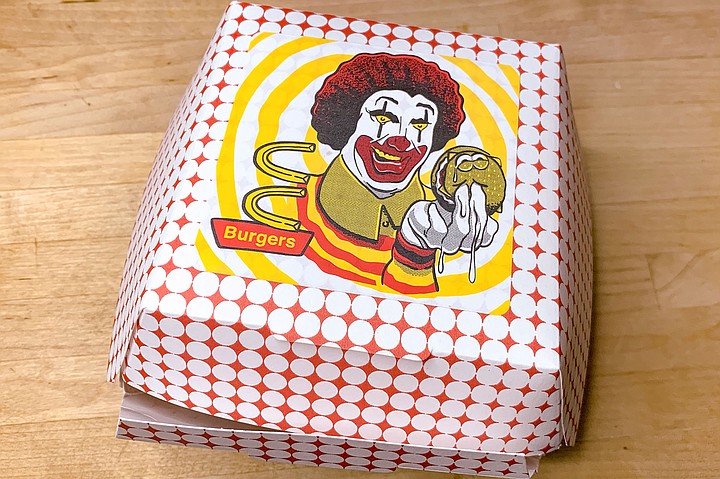 There’s a Chik-Fil-A style chicken slider ($5), a bacon wrapped Hot Dog on a Stick ($10), and in reference to der Wienerschnitzel, a chili dog ($7.29). Of course, no San Diego fast food riff would be complete without a nod to Jack in the Box, and its crispy shell, value menu tacos. Likewise served by the pair, the Jack in the Crack tacos have been made vegetarian, with soyrizo to go with the shredded iceberg lettuce and slice of American cheese ($5). The upgrade here is really all about the fresh corn tortillas and guajillo salsa.

Despite the availability of dine-in reservations, I opted for a take-out order. Consortium is so committed to the bit, it made up its own cardboard fast food packaging, printed with a creepy clown graphic and logo repurposing golden arches to spell the initials CC. 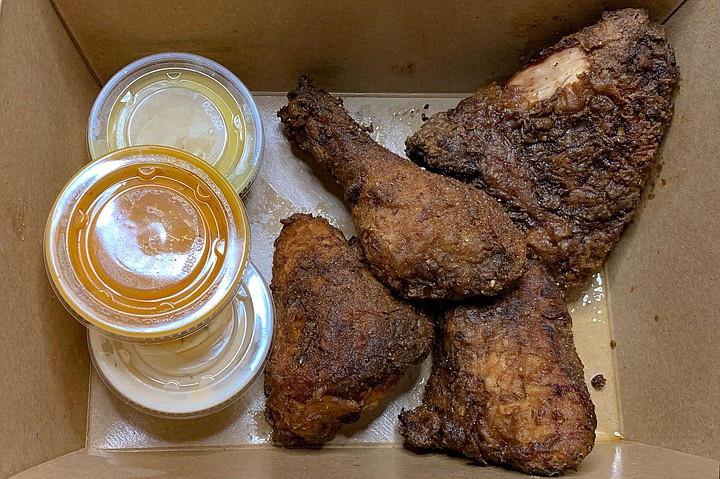 A plain cardboard box of fried chicken, not quite the Colonel’s recipe

So, I was a little disappointed when my four piece bucket of C&C Fried Chicken ($15) didn’t actually come in a bucket. It was good chicken — I went for the OG seasoning rather than the buffalo or chili-garlic styles, and it came with a trio of sauces anyway. But I think going after KFC may be the Achilles heel of Consortium’s cheeky fast food endeavor. At twice the price, I can’t definitively say it tastes better than the Colonel’s secret recipe, which has never asked for sauce.

For the most part, though, I found this a fun way to return to the San Diego dining landscape while subtly encouraging take-out as an option. And you definitely won’t find a McDonald’s burger that comes close to the one served here with waffle fries and topped with white cheddar, onion confit, and kosher dill pickle. Craft & Commerce always belongs on the short list of best burgers in the city.

105-Year-Old Santa Monica House Could Be Replaced by Development

Your favorite gathering places are reopening today: Here’s what to expect