Covid-19 in the US: Is this coronavirus wave the worst yet? 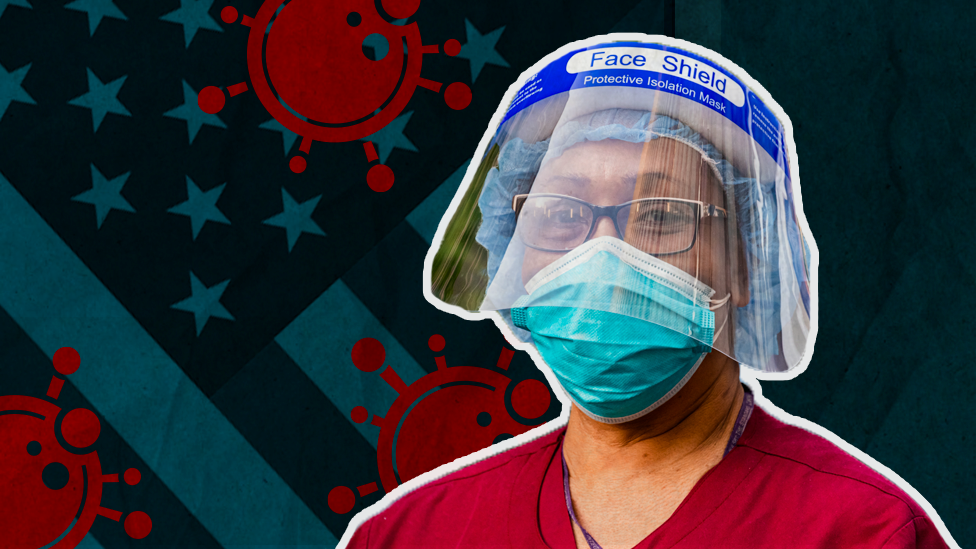 Americans may have tuned out of coronavirus news as they focused on the outcome of the presidential election, but the pandemic has quietly been getting worse in the country.

The number of infections in the US has reached new heights in recent days, surpassing 160,000 cases in one day for the first time since the outbreak began.

Dr Anthony Fauci, the top US infectious diseases expert, has warned that the country faces “a very challenging and ominous situation” as it approaches winter.

So how bad is the situation and how much does it vary across the country?

With more than 11 million confirmed cases, the US has the highest number of infections in the world and the spread of the virus shows no sign of slowing down.

The chart below shows that the current wave is growing at a faster rate than the previous two – although some of that is down to increased levels of testing.

During the spring wave, testing was mostly limited to confirming cases in people who were already in hospital, meaning the true scale of that outbreak wasn’t fully captured.

But the latest data compiled by the COVID Tracking Project shows the current surge is not just down to increased testing – the number of tests carried out in the US was up by 12.5% week on week, while the number of cases increased by more than 40%.

One likely cause is the change of season and colder weather driving people indoors to socialise, where the risk of spread is heightened due to less social distancing and poor ventilation.

The strain on hospitals is growing

Because of the change in the level of testing, a better way to compare waves is to look at the number of people being admitted to hospital because of Covid-19.

One encouraging observation is that fewer coronavirus patients are being put on ventilators – for now at least – which shows the progress that has been made with other treatments since the spring outbreak.

In a recent study in New York, researchers found that the probability of death among coronavirus patients was down 18 percentage points from the spring, in part due to new treatments and better knowledge of the virus among medical staff.

But these improvements are dependent on the quality of care being received, which is put at risk when hospitals reach capacity and staffing levels are put under pressure.

The death toll is still climbing

Despite the progress being made in fighting the infection, the number of daily deaths in the US is on the up once again.

On average, more than 1,000 people are now dying every day in America and recent daily spikes have been higher than those seen during the summer outbreak.

The worry is that deaths is a measure that lags behind cases and hospitalisations, because it can take several weeks for those who are worst-affected to die, so we could well see it rise to the levels of the spring outbreak in the next few weeks.

At the moment, the US death toll stands at about 250,000 – again the highest figure in the world and about a fifth of the global total of confirmed coronavirus deaths.

This wave is hitting every US region

The current wave of infections is the third one to hit the US this year but the one major difference is that it’s affecting every region at the same time.

The spring wave was predominantly in the Northeast, while the summer one hit the South and West hardest. This time around, it’s the Midwest where infections are rising fastest – but every region is seeing a spike in cases.

In March, as New York’s healthcare system struggled to cope with a surge of coronavirus cases, Governor Andrew Cuomo issued a plea to doctors and nurses across the country: “Help New York. We are the ones who are hit now.”

Healthcare professionals were able to answer that call because the outbreak was isolated to the Northeast, but if a similar call is made in the next few weeks it will be harder to answer now that cases are rising in every state.

At the moment, the worst outbreaks are in the Midwest, as the map below shows, and officials in some of the worst-hit states have warned that hospitals are already in a challenging situation.

Map showing the number of average daily cases in the last week per million people. The numbers are highest in Midwestern states like the Dakotas, Iowa and Wisconsin.

Many of these more rural states had avoided wide outbreaks of coronavirus until recently, meaning there were often few restrictions already in place.

In North Dakota, the Republican governor had resisted calls for the wearing of face masks to be mandated but last week he issued an order enforcing it, saying the state’s doctors and nurses “need our help, and they need it now.” Other Republican governors have made similar moves.

US must ‘hang on’ until vaccine arrives

There has been lots of positive news on the vaccine front in recent weeks, but however quick they are delivered will be too late to stop the current wave of infections.

Speaking to Chatham House last week, Dr Fauci said Americans must “hang on” until the vaccines arrive. “The cavalry is coming but don’t put your weapons down yet,” he added.

He said people needed to “double down” on key public health measures like social distancing, the wearing of face masks, and washing hands but he also called for “a much more uniform approach from all the states”.

That looks unlikely to happen under President Trump, who while urging Americans to remain vigilant, insisted last week: “This administration will not be going to a lockdown.”

President-elect Joe Biden has vowed to make tackling the pandemic a top priority, but the third wave will have claimed the lives of tens of thousands more people before he takes charge.

One forecasting model run by experts at the University of Washington says the US could see another 100,000 deaths between now and 20 January, when Mr Biden enters the White House.

Janet Yellen Has Excelled at Big Jobs. This Will Be the Hardest One Yet.

Anti-Semitic crime rises in Germany, most from far right