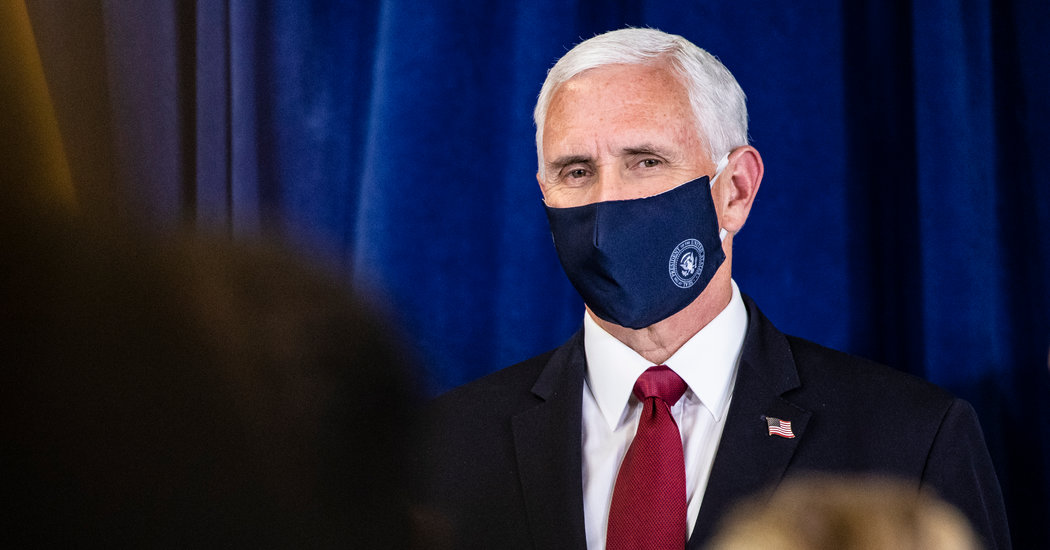 Masks became a political cause for some in the early months of the pandemic. A growing set of Republican leaders are suddenly pushing Americans to wear them.

But even as some conservatives and libertarians have made opposition to masks a political cause, Republican governors and others in their party are suddenly trying to send a different message as the pandemic has hit hard in their home states, ending any notion that the coronavirus is not a real menace.

Vice President Mike Pence has abruptly begun regularly wearing and recommending a mask. Gov. Doug Ducey of Arizona, facing an uncontrolled outbreak of the coronavirus in his state, made a plea this week: “Arm yourself with a mask.” And Representative Liz Cheney of Wyoming tweeted a photograph of her father, the former vice president, wearing a fleece vest, cowboy hat and pale blue surgical mask covering his face. “Dick Cheney says WEAR A MASK,” she wrote, adding the hashtag “#realmenwearmasks.”

On Tuesday, Senator Lamar Alexander of Tennessee, the Republican chairman of the Senate Health Committee, appealed to the president himself: Wear a mask, Mr. Alexander implored, and end a dangerous partisan divide over the practice, with some Republicans shunning masks because Mr. Trump has declined to wear them.

“The stakes are too high,” Mr. Alexander said at a hearing, “for this political debate about pro-Trump, anti-Trump to continue.”

The sudden overtures have followed a surge in coronavirus outbreaks in several states, a spike in hospitalizations among younger people and a growing realization that the virus is once again out of control. But unlike in the earliest months of the pandemic, some of the hardest-hit areas are in the South and West.

The new entreaties follow months of misinformation, debate and confusion about the question of wearing a mask. Early in the pandemic, government officials instructed Americans not to buy or wear masks. In April, they revised that guidance, advising that cloth face coverings were recommended.

“Aristotle always said, a long time ago, that when you put a message on a blank slate, that first message is critical,” Dr. Robert Redfield, the director of the Centers for Disease Control and Prevention, said in an interview on Tuesday. “When you want to rechannel a message, it’s always a problem.”

State and local officials have carved out their own rules along the way, making masks mandatory in some places and a mere suggestion in others.

Resistance to masks began with Mr. Trump, who, as the C.D.C. urged Americans to wear face coverings, stressed that the measure was voluntary, and said, “I don’t think I’m going to be doing it.”

The president has continued to resist wearing a mask and views it as a “personal choice,” his spokeswoman said on Monday, a stance that has led many of his supporters to refuse to wear one, even in cities and businesses where they are required. Mr. Trump has repeatedly downplayed the severity and danger of the virus, and some of his supporters have responded with similar doubts. On Wednesday, Mr. Trump seemed to change his position amid the shifting public messages from Republicans. “I’m all for masks. I think masks are good,” he told Fox Business in an interview.

Initially, many Republicans had followed Mr. Trump’s lead. But the recent chorus of encouragement on mask-wearing has come from all directions: on the Senate floor and on social media, from Republicans who are no longer in office and from those whose states are experiencing an alarming uptick in coronavirus cases.

On Monday, Gov. Brian Kemp of Georgia posted a selfie wearing a mask decorated with the University of Georgia’s bulldog mascot. “Wear your mask, Georgia — and go Dawgs!” he wrote.

Senator Mitch McConnell of Kentucky, who regularly wears a mask in public, said in Washington this week that there must be “no stigma” about wearing masks. “Wearing simple face coverings is not about protecting ourselves, it is about protecting everyone we encounter,” he said.

Image “Wearing simple face coverings is not about protecting ourselves, it is about protecting everyone we encounter,” Mitch McConnell, the Senate majority leader, said this week.Credit…Anna Moneymaker/The New York Times

Dennis Bonnen, the Republican speaker of the Texas House of Representatives, has been outspoken on the necessity of mask-wearing in order to reopen the state’s economy.

“It’s time to stand up to the mask naysayers who speak loudly but act irresponsibly,” he said in a statement last week.

They have echoed messages from some other Republicans, including Gov. Larry Hogan of Maryland and Gov. Mike DeWine of Ohio, who routinely wear them and urge their constituents to do the same. Democratic officials have overwhelmingly endorsed face masks, arguing for months that they are a valuable tool in slowing the spread of the virus, particularly indoors and in crowded places where social distancing is impossible.

“We have been trying to work against the headwinds of partisanship on face masks,” Gov. Gavin Newsom of California, a Democrat, said in an interview on Wednesday.

But pleas to wear masks have not always been received warmly by constituents. Mr. DeWine said he had struggled to convince the public of the usefulness of masks in fighting the spread of a highly contagious virus — in part because the C.D.C. has been inconsistent in its guidance.

“We certainly were hindered by some of the health messages coming out from C.D.C. and others,” Mr. DeWine said. “We had mixed messages that were not helpful.”

In the early weeks of the coronavirus pandemic, the directive from administration officials, governors and mayors was clear: There is no need for most people to wear masks.

By the start of February, the C.D.C. issued its first formal guidance on its website, saying that the agency “does not currently recommend the use of face masks among the general public.”

At that time, the mask-wearing guidance rested on several points: that medical masks needed to be reserved for medical workers, that they may offer a false sense of security, that they are often improperly worn and, most important, that they likely would not offer much protection from the virus.

But evidence grew in February and March that the virus was being spread by asymptomatic people, and in April, the C.D.C. changed course, advising that cloth face coverings were recommended.

“The reality was that it was based on data and science,” Dr. Redfield said on Tuesday, adding that as soon as the agency had “significant” evidence that asymptomatic transmission was occurring, it moved to recommend face coverings.

“We believe that wearing a face covering is a critically important tool,” he said. “It’s our best weapon to intervene with human-to-human transmission right now.”

Local and state public health officials, who have extensive experience fighting infectious disease, joined the consensus that face masks were critical in combating the coronavirus.

At the same time, a small but vocal opposition to masks was emerging.

Groups that fiercely opposed restrictions, including stay-at-home orders and closures of businesses and schools, began holding rallies in state capitals in April, organizing on Facebook and flouting directives from health officials to observe social distancing and wear masks.

One group, passing itself off as a government entity called the Freedom to Breathe Agency, sold fraudulent cards on the internet that allowed users to claim a medical exemption to masks.

Some of the anti-mask fury was directed at businesses that required masks to enter. Bystanders captured cellphone videos of angry mask skeptics hurling produce in the aisles of grocery stores before storming out. Employees wearily endured verbal harangues from customers.

Some businesses have lost patience.

Hugo’s Tacos, a taqueria in Los Angeles, said this week that it was temporarily closing its two locations after a barrage of attacks from customers who refused to wear masks.

“Staff have been harassed, called names, and had objects and liquids thrown at them,” a message on its website says. “A mask isn’t symbolic of anything other than our desire to keep our staff healthy.”

The message adds, “Thank you to the majority of our guests who are always respectful and kind.”

Demonstrators in Austin, Texas, protested against mandates to wear masks amid the coronavirus pandemic on Sunday.Credit…Sergio Flores/Reuters

In recent days, as new coronavirus cases climbed, state and local officials have anxiously looked for ways to tamp down outbreaks. They have frequently turned to the same tool: face masks.

Governor Newsom, eyeing an explosion of cases in California, instituted mandatory masking statewide on June 18. In Jacksonville, Fla., where the Republican convention is expected to be held in August, city officials issued an order on Monday making masks mandatory indoors, joining scores of cities across the country.

Face masks will soon be mandated in at least 19 states, including New York, Illinois, Massachusetts and Kansas, whose Democratic governor, Laura Kelly, on Monday said she would issue an executive order requiring their use in public.

Ms. Kelly said that as cases continue to rise in that state, a mask mandate offered the best route to maintaining public safety while allowing businesses to remain open.

“I do expect that there will be some who will be outraged by this order,” she acknowledged at a news conference.

Some Republicans in Kansas immediately registered opposition, arguing against a uniform policy for a state with both urban and suburban areas as well as vast rural expanses, even though the virus is highly contagious and has affected both densely and sparsely populated communities.

“A lot of people take their liberty quite seriously — they prefer to have education and make informed decisions, as opposed to a mandate,” said Mike Kuckelman, the chairman of the Kansas Republican Party. “This just seems heavy-handed and unnecessary for large portions of our state.”

In Texas churches last weekend, the tension among conservatives was evident. At a Sunday service in Dallas, Mr. Pence said masks were “a good idea” and pointedly wore one.

But the night before, at a megachurch in Houston, a well-known pastor, Ed Young, received applause from the socially distanced congregation after declaring that masks should be voluntary.

“You can wear a mask, or you can not wear a mask,” he said. “Oh my goodness, tell everybody, you have to wear a mask? We don’t do business that way.”

A restaurant employee checked the temperatures of customers on Sunday in Miami Beach, Fla.Credit…Saul Martinez for The New York Times

In Palm Beach County, Fla., local officials debated last week whether to adopt an indoor mask mandate and heard testimony from residents who were deeply opposed to the measure.

Commissioner Melissa McKinlay said the commenters, even as their speeches ricocheted around social media, did not reflect the opinion of most residents. The mandate unanimously passed.

“The fact that we were spending time — so much time — debating whether or not to wear a mask takes away time from when we should be debating getting grants to our small businesses or getting testing done,” she said. “Geez, pick your battle. My battle is to keep people safe. I shouldn’t have to argue about whether or not to put a mask on.”

Brian Hook: US Will Not Allow Iran to Acquire Nuclear Weapon

Why Is There No Consensus About Reopening Schools?