A New U.S. Law Would Target Doping’s Enablers. International Watchdogs Don’t Like It. 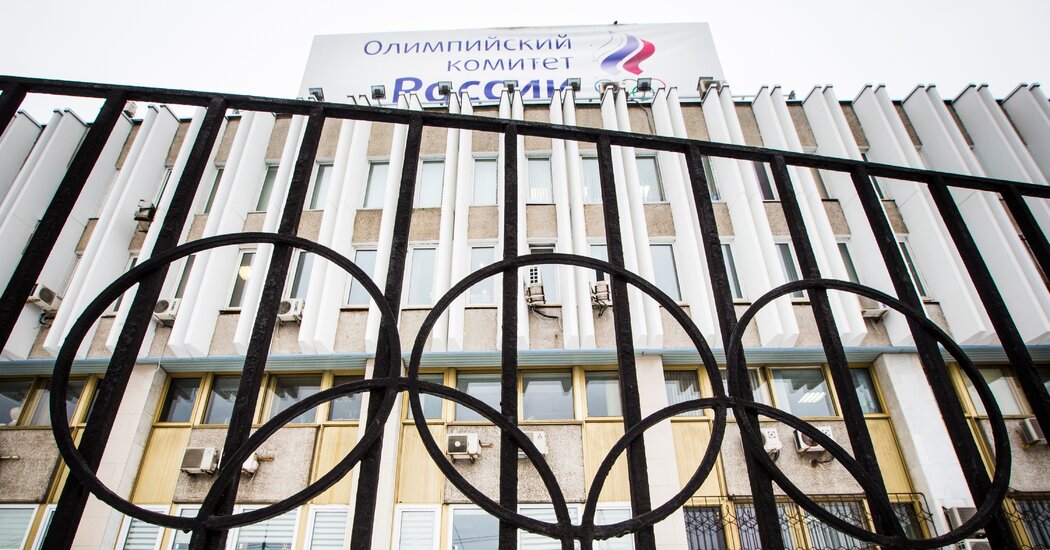 The Rodchenkov Act, awaiting President Trump’s signature, would allow American law enforcement authorities to go after the people who facilitate doping. The World Anti-Doping Agency says it will cause confusion.

A proposed new law, named after a whistleblower who exposed Russia’s state-aided doping scheme at the Sochi Games in 2014, would criminalize international doping conspiracies.Credit…Alexander Zemlianichenko/Associated Press

New legislation that would expand the ability of law enforcement officials in the United States to prosecute people who participate in doping is garnering criticism from an unexpected quarter: international doping watchdogs.

Backers of the bill, the Rodchenkov Act, say it would serve as a major deterrent to doping and provide an important weapon in the battle for clean sport because it would enhance prosecutors’ efforts to charge networks of cheaters, including the coaches, trainers, scientists and sports officials who enable it, with federal crimes even if they did not take place in the United States.

This law would not apply to athletes because it targets large, organized doping conspiracies rather than simple violations, which can be prosecuted under other laws. But the law treats athletes who lose to competitors who are later shown to have cheated, as well as sponsors and broadcasters of tainted competitions, as the victims of fraud. That allows them to receive restitution as part of a conviction or plea deal from the people who have fostered the schemes.

The bill, which had broad bipartisan support, is on President Trump’s desk. He is expected to sign it though the timing is unclear.

No one expects the United States to begin extraditing facilitators of doping from nations like Russia, whose state intelligence services participated in systematic cheating during the Sochi Olympics in 2014 and at other events.

However, being formally charged can make it risky for those officials to travel outside their countries to competitions and prevent them from using American financial institutions. Those factors give the law teeth beyond the geographical and geopolitical constraints of the United States criminal justice system, the law’s supporters say.

The bill, which passed the Senate on Monday and had previously passed the House, is named for Grigory Rodchenkov, the former director of Russia’s antidoping laboratory who helped mastermind the system that allowed Russian athletes to use performance-enhancing drugs without getting caught. Rodchenkov fled Russia after the Sochi Olympics, where Russian officials swapped dirty urine samples for stored clean ones. He exposed one of the largest doping schemes in sports history and now lives in the United States in an undisclosed location.

But instead of gaining support from all the major sports organizations that have long condemned the use of performance-enhancing drugs, the Rodchenkov Act has become the latest skirmish in a long-running turf war that has pitted antidoping leaders in the United States and their allies in government and law enforcement against international antidoping and sports officials.

“It is a monumental day in the fight for clean sport worldwide,” Travis Tygart, the chief executive of the United States Antidoping Agency who lobbied hard for the bill’s passage, said on the day Congress approved it.

For its part, the World Anti-Doping Agency, which acts as the global leader in the fight against drugs in sports, opposed the Rodchenkov Act, as did the International Olympic Committee, WADA’s leading benefactor, and other international sports organizations.

As the bill was working its way through Congress, Witold Banka, the president of WADA, said if the United States acted alone in criminalizing international doping it would compromise WADA’s efforts to maintain one set of rules for sports everywhere. “This harmonization of rules is at the very core of the global antidoping program,” Banka said.

After Congress approved the bill, Banka and WADA went further and said the law could foster discrimination of athletes from certain countries. Also, the law applies only to schemes connected with sports organizations that are signatories to the WADA code, which sets international standards for testing, investigations, laboratories, exemptions, prohibited drugs, privacy protection and compliance.

That provision excludes American college sports and most of the professional leagues and associations that are based in North America, including the N.F.L., N.BA., Major League Baseball and the N.H.L., except when athletes from those sports are participating in international competitions.

Because drug policies are collectively bargained in the North American pro sports leagues, penalties for doping violations in those organizations are far less stringent than they are for international sports. Professional athletes in the North American leagues who fail doping tests are usually suspended for a portion of a season. International violations usually bring suspensions of at least two years. Also, the professional sports leagues are not signatories to the WADA code, something that has garnered criticism from both WADA and the I.O.C.

“WADA wishes also to understand why this legislation excludes vast areas of U.S. sport, in particular the professional leagues and all college sport,” read a statement from the organization upon the passage of the law. “If it is not good enough for American sports, why is it fine for the rest of the world?”

WADA has also predicted that the Rodchenkov Act may make life more complicated for whistle blowers, who theoretically could be exposed to prosecution if they were participating in the scheme before offering information about it.

The law’s supporters say that claim is baseless because the bill provides federal witness protection for whistle blowers and a process that helps them deal with the legal ramifications of their actions.

Also, they say criticism of the law because it includes only people who are signatories to the WADA code is a red herring because the existing criminal statutes for fraud, conspiracy and illegal drug distribution already allow law enforcement in the United States to go after those who facilitate and enable doping within the pro sports leagues and college sports.

In a statement, the I.O.C. applauded the strategy of targeting doping networks but echoed the criticism from others about overlapping authorities and the exemptions for the North American pro leagues and the N.C.A.A.

The hope, supporters of the new law say, is that it will help make the Summer Olympics in Los Angeles in 2028 the cleanest ever because the consequences of coming to the United States for anyone involved in doping anywhere are so substantial.

Jim Walden, a lawyer representing Rodchenkov, said the passage of the law represented “the dawn of a new day” for athletes dedicated to competing without doping. “This will be an immediate worldwide deterrent.”

Disappearing Tweets? Twitter Now Has a Feature for That